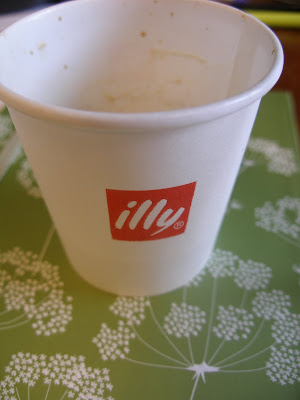 So as someone who is not a natural morning person but who is now in the situation of waking up at 6am every morning, espresso is my pot of gold at the end of the rainbow.

Being in an entirely new building, in a fairly new city, I made my way to the food court downstairs (yes, an entire food court), and I was THRILLED to discover that, directly in my line of sight, right before my very eyes was GELATISSIMO, a gelato and espresso stand.

As per my Lenten promise, I am not allowed to have chocolate, so gelato was not as tempting as it normally is, but espresso... oh espresso was more tempting than ever.

So I did something that I have never done before: I ordered an espresso in the United States of America. I know. I know. I am a coffee snob. I apologize; I do. However, Italy has ruined me, and there is nothing I can do about it. Instead, I tend to just see coffee here as an entirely different product, drunk in entirely different quantities, with an entirely different taste and consistency. And in this way, I can like American drip coffee. However, I don't dare ever order an espresso in the U.S. because I know that my snobbish airs will stir and that my nose will involuntarily lift up probably at the very sight of an American espresso. (Again, I apologize.)

Regardless, it made me happy to know that, even though new building is not situated in Rome, I have gelato and illy right downstairs.
Labels: Coffee Espresso Gelato Italy New thing Rome