Now I have already mentioned my groupon purchase, and I have even mentioned my first groupon use on the tap class. This was Take 2, and we tried a Hip Hop class. Little did we know that what actually awaited us was an introduction to Pop and Lock. We learned to dime stop, pimp walk, strut and even to free style.

Our class was at newborn pace, so our rendition of the moves was probably not recognizable to the rest of the dancing world. I am not sure that they were even recognizable to us. For instance, our upper body pop was an extended arm and a clenching and unclenching of the tricep, which essentially didn't look any different than a regular outstretched arm.

Let's just say we are not going to be on America's Best Dance Crew anytime in the near future.

I think most of us should have taken Will Smith's advice in "Hitch": "This is where you live. This is home" and stuck with swaying side to side. (By the way, we kind of had a Kevin James in the class too.) 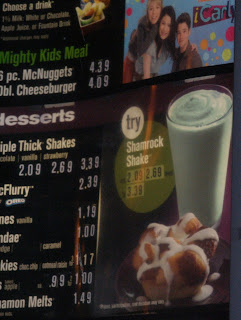 Anyway to reward ourselves for the exhausting tricep clenching, I made a very rare suggestion of going to McDonald's. However, this is only because, in honor of St.Patrick's Day, McDonald's adds mint to their menu in the form of a Shamrock Shake, and I needed to try it. Mint lovers take note, the Shamrock Shake disappears in 10 days. (Fyi, I am only promoting mint incorporation into foodstuffs, not necessarily patronizing McDonald's.) 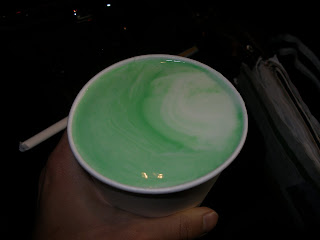