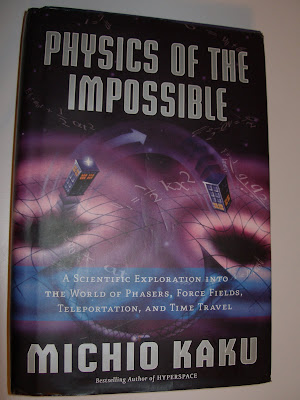 Having finished "Physics of the Impossible," a very theoretical and lofty science, over-my-head type of book, I still came away being fascinated that (though the book makes no allusions to this whatsoever and might actually resent this type of thinking), the more theoretical and complicated science gets, the more it seems to resemble religion.

Quantum entanglement for example, a by-product of Albert Einstein's quantum theory, is "the concept that particles vibrating in coherence have some kind of deep connection linking them together."

The author, Michio Kaku, phrases it this way:

In essence, we are all entangled in one another, and in that way we are one in the same, because, in this theory, we have the same wave functions. So really this is the scientific backing for "Do unto others as you would have them do unto you" or even the Buddhist idea of sentience, that all things should be respected. If everything is interconnected, wouldn't it make sense to treat everything: people, nature, animals with respect because we are all part of the same essence?

If I were scientifically and/or mathematically minded, I think this would have been my area of focus. Sadly, I am not smart enough to understand more than what I wrote here on this blog post... But contemplating quantum entanglement and our inter-connectedness is my new thing of the day.
Labels: Books New thing