Can acetone be considered food? 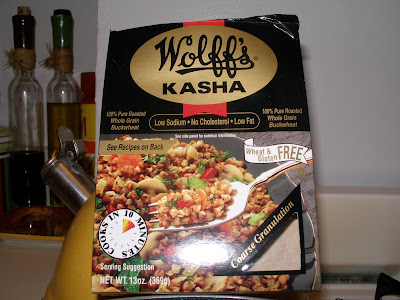 Ok readers: I need your help with this one because I am honest to goodness dumbfounded. I made Kasha tonight. I didn't know what it was, but it was in the international section and it looked like a grain. I like rice, couscous, buckwheat, and everything else I thought to compare it to. So I bought it.

In accordance with my way of cooking, I took a liberal approach to the instructions, and I used my artistic license to leave out some ingredients (namely the egg). The meal turned out to be a grainy version of paint thinner. It smelled, tasted and felt like something from a construction site. The smell was definitely the worst though and it tainted my Tupperware almost against further use.

Now, I am used to my creations not turning out exactly as I would want them, so I am also accustomed to "fixing" my dishes by adding various vegetables, sauces, spices, condiments or in truly bad scenarios, all of the above. Usually, I can turn into something that I can at least stand to eat. I hate wasting food. This scenario, however, was the latter, and despite olive oil, balsamic vinegar, salt, pepper, parsley and carrots, it still reeked of a type of acetone.

I am convinced that I did something wrong. Wikipedia reassures me that it is, in fact, buckwheat (buckwheat groats to be exact), and that it is considered edible. It is apparently also a common food in Eastern European cuisine. For my Serbian friends, they suggest that it is called каша or kaša.

So my question to any of you out there who has cooked, tasted and/or loved this dish: is the egg that vital to its proper outcome? Or what do you fathom I did to it to change a grain into a chemical? ... I don't particularly care for this magic power.
Labels: Cooking Food New thing