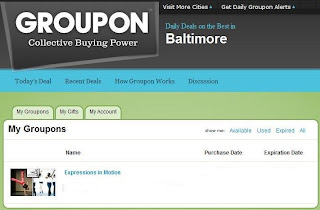 So there is this neat little invention that allows people to vote on deals at local restaurants, shops and other businesses. Usually, the deal is about 50-60% off of the regular cost of the service/product.

When I saw a groupon for dance classes, I immediately voted on it and subsequently bought it. It is a pretty fascinating and simple concept.

I used my first of 5 classes to take tap, a dance form that I was very involved in througout high school and have only dabbled in since. However, even as dabblers, the class was a little lame, and I think the next 4 classes will be reserved for trying things like Capoeira and Yoga. 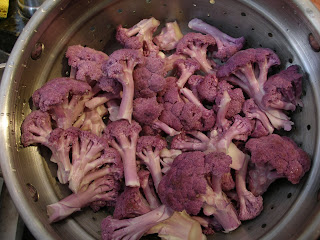 Now I have to admit, that I may have tried this before. In fact, I will put this disclaimer out there that, with any of these projects, there might be a chance that I have done these in the past and have since forgotten.

You see I think there are holes in my brains. Out of these holes, random facts, names, memories, and especially numbers escape. I, for example, seemed to have lost the entire memory of having gone whitewater rafting in Alaska. I was so convinced that I never did this that I fought my sister on this topic for quite awhile before she called in reinforcements and had my parents verify this experience. So, if I have forgotten a whole 2+ hour, should-be engaging event, it could very well be that I have also forgotten something small like having tried a bizarrely colored vegetable.

For this pocket project, we'll just have to go by intention.

As for the purple cauliflower, it tasted the same, yet was intriguing and fun until I saw that the water beneath the steamer had turned a kind of murky blue. Then all of a sudden, I felt like I had eaten a rainbow-dyed carnation. I still don't know for sure if the said vegetable was dyed or just perhaps genetically engineered. Either way, it has turned me off to unnaturally colored legumes. 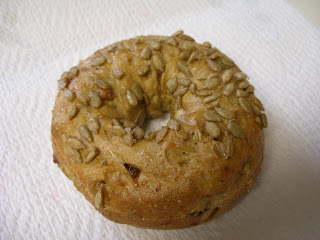 Yes, I'll admit; my new things have been very food-oriented. I have noticed this. I think this points to the fact that I spent 18+ years in the Baltimore county suburbs, and that doesn't allow a ton of room for creativity. I will also admit that this is my own fault and living in suburbia tends to drain my mental juices so that I lose some of my own vigor and interest, but there it is. Today my interesting thing was a bagel.

In my defense, last night, I did go salsa dancing at a very flowery and gaudy place called Latin Palace. So though I was led in a very fancy bachata with an older Cuban, danced a ridiculously fast merengue with a nice Ecuadorian and got hit in the head twice on a crazy busy dance floor during a 12 minute long merengue-turned-bachata, this blog is meant to talk about new adventures. And ironically, I wouldn't call this experience exceptionally new.

However, after a night of hip shaking, head throbbing, feet aching, latin dancing, sometimes you need a day with only a bagel's worth of excitement.


Why am I doing this?
Labels: Dancing Groupon Life New thing