So you observant ones out there may have noticed that I skipped projects 26-29. I did this only because I was in DC for about a day and a half, and it disrupted my posting schedule.

Here are the random things I tried on Sunday through Wednesday: 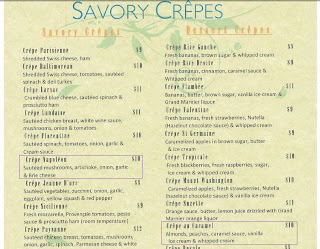 Project 26: A restaurant I have never been to in Baltimore: Crepe du Jour

I consider this particualr new thing quite an accomplishment because, having grown up in Baltimore to parents who are very fond of eating out, I have tried the vast majority of restaurants in the greater Baltimore area. This one, however, had managed to escape our line of vision. Crepe du Jour is a lovely french restaurant, very nicely decorated with bright yellows and blues, red flowery table cloths and the sentimental French paraphinalia of someone who adores this country: posters, postcards, french sayings... It was lovely. And the crepes were pretty spectacular themselves: a sauteed mushrooms, artichokes and brie combination for the main course, and an almonds, strawberry and caramel treat for dessert. yum. 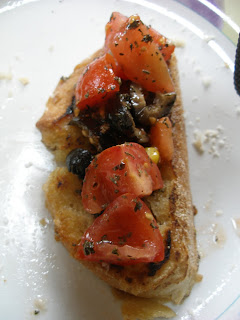 I have often stuck random vegetables on a piece of bread, drizzled a little olive oil on it and called it a bruschetta. For this one, however, I actually looked at a variety of recipes and their oil/vinegar combinations as well as their spice suggestions. It turns out that following directions sometimes pays off. 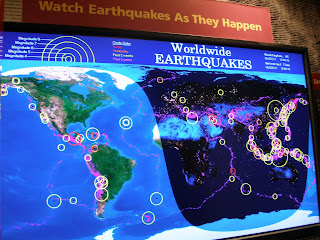 Even though I remember very little about the Smithsonian Natural History Museum, I know that I went there, more than once, in my school days. The only thing I really remembered seeing was the hope diamond. So my trip there on Tuesday felt new, though it wasn't. What was new, was watching (and/or being interested by) a map of the world on which it pinpointed all the earthquakes happening at that moment. Every 10 minutes, an earthquake of some magnitude hits a part of the world. It was crazy to see the map almost cut up in puzzle pieces with the fault lines as delineations. 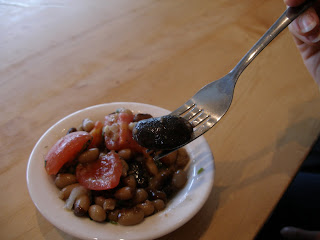 If my trip to the Natural History Museum didn't count, we also went to the fairly new American Indian museum. Unfortunately at this point, it was a little late in the day to start seeing a new museum; so we went to the food court instead, which was an adventure in it of itself. Each stall is from a different area of the country with different Native American cuisine. Again, it being late in the day, the majority of the stands were closed, but I managed to get a bean salad, with massive beans of unknown variety. Whatever it was, it tasted good! 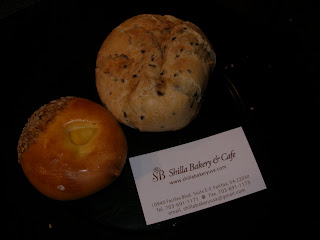 While in the D.C./North Virginia area, we made a trip to Shilla, a well-known Korean bakery. I bought two particularly interesting pieces to bring home.

One was a tapioca, bread-type roll. The other was a chestnut filled sweet bread. Both were novel tastes that I enjoyed. Though I couldn't figure out if they were meant as desserts or as accompaniments to a meal... I ate them as a snack and figured that was acceptable. 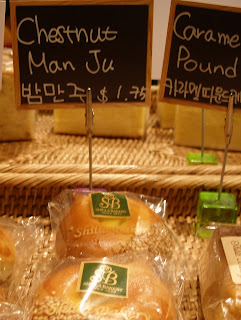 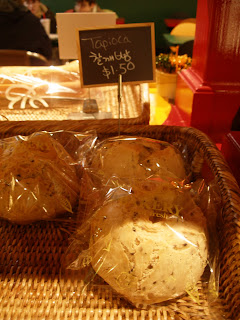 Why am I doing this?
Labels: Food Museum New thing Washington DC