So since I just celebrated the new year this past weekend, it seems appropriate to have new year's resolutions.

Probably one of the most common resolutions made is "to eat healthier." I cannot really claim to need this resolution. As a vegetarian who generally hates butter, cream, fried foods, oily foods, potato chips, most processed foods, and generally anything that is considered "american," I do not tend to have a problem with this.

My bigger problem is variety. I don't actually care too much about variety; I can eat the same things every day for a week on end and not really think twice about it. However, my last roommate brought this fact to my attention when he saw me, night after night, make salad for dinner. While he would be chopping endives and leaks while panfrying bacon for a new sauce, I was dumping my traditional can of chickpeas into the salad bowl.

So his point was well-taken, and I have been looking for other interesting ways and things to cook. Then my friends told me about the Griddler! 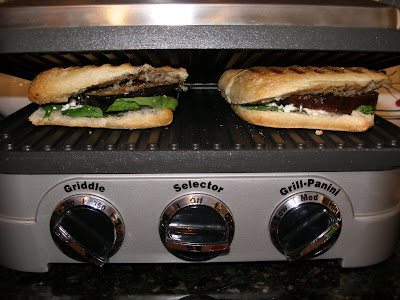 I am sure that this is by no means a revolution to the cooking world, but it was to me. I now have a new way of cooking vegetables and creating proper panini. 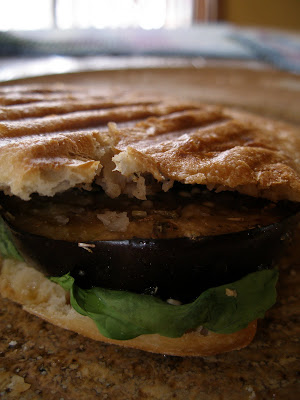 Eggplants, spinach and feta cheese: my first attempt with the griddler was a successful one. Salad and chic peas no more!

However, since I have already had this concoction two days in a row, does anyone have good panini recipes before I replace panini for salads as my nightly tradition??

Why am I doing this?
Labels: Cooking Italian Life