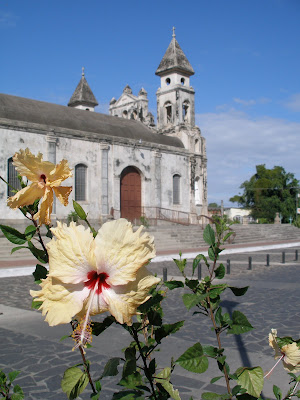 I have been struggling with how to faithfully describe my trip to Nicaragua. I loved my time there, but more than that I was grateful for the chance to open my eyes to a different part of the world. I had never been to Central America before; yet, while it was entirely new, it resonated with some part of me, making it feel strangely familiar. The longer I stayed, the more I became enamored of the place and people and the more it felt familiar.

I learned that Nicaragua was a place to look beyond the surface. This country places before you the challenge of not judging a book by its cover. I often had to catch myself from doing so.

I won’t deny that I was a bit daunted by this trip. I knew very little of Nicaragua and what I did know was its legacy and not its present day. My nascent Spanish had been all but engulfed by my recent years in Italy, and I had never been to a country whose poverty is quite as widespread. I wasn’t sure how comfortable I would be in the role of a tourist among this hardship.

My first day in Nicaragua didn’t assuage this apprehension. I had heard more than once that Managua was not really worth spending time on, but my stubborn nature kept me from heeding this advice. I thought it a shame to fly into a country’s capital and not give it at least 24 hours of our time. In the end, I don’t regret this decision; however, I have a better understanding of why this advice was given.

In the metaphor of not judging a book by its cover, Managua is definitely the cover, and it was very hard to look beyond it at first. Our first drive through the city took us into very heavy traffic, making the 90 degree dusty and thick air sit on your skin while the car was at a standstill. People walked up and down the lanes of traffic with bags of dried and fresh fruit, sacks of water and random trinkets like height charts and cell phone chargers, trying to take advantage of the down time and sell these goods to the people in cars. You could tell that this was their living and that what they made from these sales did not offer much of an income.

We also passed many neighborhoods that sadly looked like the stereotypical images that humanitarian organizations take of the poor nations in which they work: neighborhoods where the houses are shacks spackled together with metal and wood bits, dirt roads, trash scattered over the ground and unkempt children and even families sitting around idly.

Upkeep was just not a financial possibility. Trash littered many streets and countrysides. Stray dogs, goats and horses were all very slim if not bony. Main streets, though paved, were often rough and holey. Buildings were often dilapidated or vacant. Even the city’s main churches often looked neglected and in disrepair. 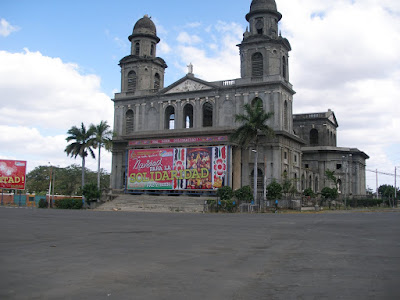 Managua seemed a city not only unfamiliar tourism, but also one that had even taught its own people not to congregate or socialize in public. The major plazas of the city and even the major sites (the cathedrals, national palace and port) seemed completely evacuated except for the odd person or two (usually men) overseeing the food stalls or sitting in groups at the periphery of a park or city wall.

All the locals we met running our hotel, even both of our cabs drivers, repeatedly uttered ciudado when we mentioned our intentions of going “sightseeing” to these major sites. The moment we stepped out of the cab, I felt that walking around to visit the sites was not the way it was done in Managua, and we would do better seeing these from a cab.

Yet, from the people we met, we could already tell that this country had more than appeared on first glance. The Nicaraguans were very kind, polite and helpful. They were also noticeably reserved, widely respectful and appreciative of our business and tips. They were very patient with my fr-italo-span-glish, which I appreciated a great deal.

They gave us advice about where and how to go places, e.g. taking buses versus cabs. They were happy to help us get a taxi and even walk us to an ATM machine. They always greeted and sent us off with a smile. The people we met in the following days in Granada confirmed these impressions. I found that they were hard working and looked for opportunities to earn a living, but respectful of your privacy and wishes if you declined their offer of live music, fresh fruit, cab rides or other sales. 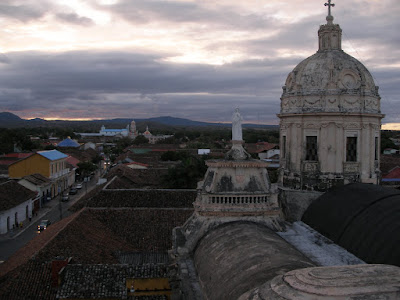 Granada is known for its colonial style with its Spanish tiled roofs and interior courtyards. Its buildings are brightly colored from sunshine yellow and robin’s egg blue to muted lavender and warm fuchsia. The city has four regal cathedrals whose domes sit on the horizon. These cupolas are only second to the skyline’s most impressive view, the Mombacho volcano. Now dormant, this volcano accounts for much of the nature in the region and for the 360 isletas in Lake Nicaragua, on the banks of which Granada sits.

With great fortune, we had managed to reserve one of the two rooms in the most perfect bed and breakfast I have ever stayed in. The web site alone was enough to sell me on the place (http://www.missmargrits.com/). However, the computer images can’t even begin to do justice to this jewel. It is run by a lovely, young British couple who were friendly, interesting, attentive and generally charming in every way. We soon befriended them and shared evenings of great conversation over liters of Toña (the local brew). We also shared a funny outing to the circus, a completely unique experience!

This guesthouse was impeccably furnished and peacefully elegant. The rooms were gracefully minimalist with beautifully carved wooden doors and an impressive head board. The white walls and white sheets were punctuated with fuchsia Tillandsia flowers that welcomed you into the room.

We woke up every morning to fresh juice of melons, oranges and bananas, coconut bread and real fruit jam served at the table adjacent to the courtyard garden.The outdoor green tiled kitchen, the deep blue walls, turquoise swimming pool and the two interior courtyards really gave you a taste of a tropical paradise. As the cherry on top, the questhouse even had an exuberant kitten that used the inner courtyard as her personal jungle, crouching behind plants and tree trunks to hunt bugs and the occasional gecko or bat. 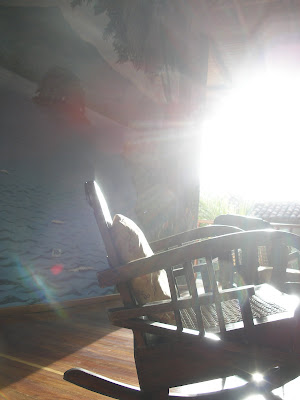 Life was made to be outdoors here. The markets, the court yards, the hammocks, the outdoor restaurant seating… you had to be in touch with the weather and seasons. Of course, we were there during dry season, and I am sure that amendments need to be made during the wet one. Yet, with courtyards constructed into houses, life seemed built for being outside. You learned to live with the temperature- when you get hot, you go in the shade or get a rifresco- when it cools down at night, you sit outside to enjoy the breeze.

Obviously, we could be nothing but tourists there. So I can’t pretend to say I know what life is like in Granada as a local or even an expat. But there was a familiarity to this way of living.

We filled our days exploring the city streets, trying out the local cuisine, and cooling down with fruit smoothies or cold cocktails. We visited the four cathedrals, two of which I mistakenly assumed were closed because of their rundown façades. In fact, these two churches, Iglesia de Guadeloupe and Iglesia de la Merced, were both fully functional and were lovely inside (at least de la Merced, we never went into the other).

This mistake precisely demonstrated to me that taking the façade as an indicator of its interior was wrong. In reality, the exterior did not at all reflect what was found inside, and this was a truth we found evident of many places in Granada. The façade very rarely lured you in. In fact, it might even deter you. You had to trust the recommendations from locals to walk into an otherwise shabby or non-descript exterior to discover the greatness inside.

Unlike North America or Europe, the effort didn’t seem to go into the outside or marketing of an establishment. There were virtually no big signs or fancy doors to cafes, hotels or restaurants. The paint was not always perfect; the windows not always clean, but the inside was often impeccable. All the care went on the interior: beautiful wooden floors and walls, thatched roofs, amazingly lush and manicured interior courtyards and vividly painted walls with colors like royal peacock blue and soft purple. 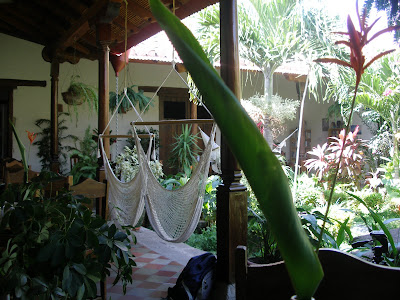 The flowers, plants and trees were often the best décor in a restaurant or hotel. It was easy to see the natural beauty in this country. It surrounded us from palm trees and tropical flowers to the volcanic lake (Laguna de Apoyo) and lush isletas; you couldn’t help but be impressed by what nature can do.

In many ways, it felt like life in Nicaragua seemed to bring things back to the important basics: family as the raison d’etre, conversation as the primary source of entertainment, community as the support system, and religious beliefs at the foundation for everything. Nicaraguans seemed to have their priorities straight, and I, for one, admired this way of living.

At the end of my trip, when I looked around Nicaragua, all I saw was the richness in their life. The litter, dirtiness and dearth of the exterior faded away into a deeper understanding of the place. I saw that the poverty did not extend beyond the facade. In the lack of focus on monetary worth, Nicaragua reminded me of what is really valuable.
Labels: Life Nicaragua Tourism Travel