A Reawakening to Flavor

Lately, I have been in a bit of a rut with food. I have been eating strictly things coming out of a can (mainly chic peas) and a box (usually couscous or pasta). Add olive oil, salt, pepper and voila: lunch and/or dinner is ready! If I am feeling extra creative, I add some oregano.
So after a surprisingly long period of this, this past weekend, I hit my threshold with oil and oregano-flavored dishes, and I went a little wild.

On Friday, I went to a Korean restaurant, Woomi Garden, in the suburbs of D.C. accompanied by two Korean-American friends. This gave me the cushioning to be a little more adventurous with my dinner choice, as they could consult me on what each dish tasted like and what ingredients I might want to avoid.

It is typically somewhat difficult to find both authentic AND vegetarian Korean food, outside of Bibimbap (which I had experienced via food truck) and Kimchee. So the selection process took awhile. Seeing as I am not a true vegetarian, (I eat fish and some seafood so I think pescatarian is perhaps the right word?), I did have a few other alternatives on the menu and, after a fairly lengthy decision process, I chose SoonDooBoo, a spicy tofu and seafood stew.

This was adventurous for me in two ways: 1) I had never had, seen or heard of it, and 2) I fear calamari and squid-like creatures. Knowing full well that the seafood found in the stew was, in fact, calamari, clams (not a fan) and oysters (neutral at best), I persevered with my choice. And overall, I did indeed like it. We had asked them to take some pity on me with the spice-level, however, we shouldn't have because I do LOVE spicy food, and I could tell that the dish was clearly lacking that flavor. I also tried (for probably the 100th time) to stomach the taste of calamari, and still could not get over the rubbery taste. So I kept my spoon close to the surface of the soup, enjoying the tofu, broth and what little spice there was.

In the end, I would probably have been just as happy with a bowl of rice (I love Korean rice!) and the side dishes that comes with all things ordered. But that was not the point; I was on a mission to reawaken my taste buds. 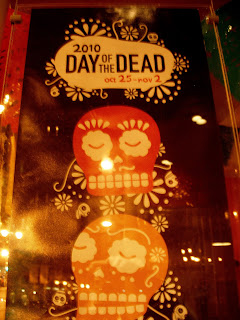 The adventure continued on Tuesday for a Mexican "Day of the Dead" celebration at Oyamel in Penn Quarter. I was shocked by how many interesting, off-the-beaten-path, ingredients there were on the menu. Again, it took me an excessive amount of time to read through all the dishes and discern what would be daring but not dumb, given my personal biases for food. And again, I was lucky enough to be accompanied by a Mexican friend who helped me navigate the menu and vividly describe what the ingredients might equate to in terms of taste. Being tapas-sized, it was also fun to pick a couple different dishes to explore. 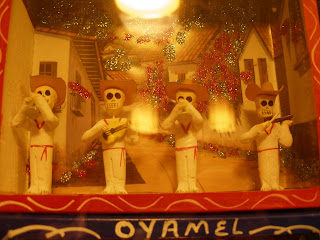 So our line-up was Papas al mole (french fries with mole, a almond, chili, cacao sauce that apparently has over 30 ingredients in it), Queso fundido con tequila (melted cheese with tequila! yum) and Arroz de huitlacoche con queso fresco (rice with"Mexican corn truffles"). This was my adventurous choice as "corn truffle" is a delightful marketing ploy to describe a fungus that grows on corn. This sounds particularly gross until you remember that a mushroom is a fungus as well. So it is just like ordering mushrooms, I told myself, and it did in fact taste like a type of truffle. So, though it was mentally hard to get my mind around it, my taste buds were pleased with whatever it was labeled. (Thank God I didn't read the description of it before I had it though!)

My other adventure was Nopal, i.e. cactus. I have had cactus juice, and I have had breaded cactus in a burrito. However, I had never had cactus salad nor plain grilled cactus, which were both on the menu. I was intrigued. My friend, however, warned me that in light of my aversion to all things slimy, I should perhaps reconsider eating cactus, whose inside is essentially the definition of slim. She instead convinced the waitress to bring us a sample of Nopal, and a few minutes later I was munching on a tiny bowl of plain, cold, square-cut cactus, as if I had just gotten the munchies and cut of a piece off of my office plant. The sliminess was tolerable, and I even thought that, with some adornments or cooking, it might be something I would consider ordering. So it is on reserve for a future occasion.


All this was topped with one of the most delicious drinks I have ever had (on par with my mojito experience at Cuba Libre); it was called a "Mexican Smash," and it tasted like a version of a margarita, but one that I loved. (Typically, margaritas are not my thing). Made of Siembra Azul tequila, agave syrup, lime, hoja santa (don't know) and roasted agave heart (which was the kicker in my decision to order it), it was a heavenly mix of ingredients I still don't quite understand. Finally, I think my taste buds heard the alarm clock.
Labels: Food Korean Mexican Washington DC