High Seas & A Barrel of Rum: A Trip to Puerto Rico

"Puerto Rico, my heart's devotion, let it sink back in the ocean. Always the hurricanes blowing..."

Since buying my ticket to Puerto Rico, I have had that West Side Story song stuck in my head, and I have to say that, in retrospect, I hope it didn't subconsciously taint my experience... 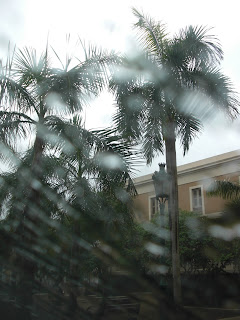 Traveling is traveling. So of course, I loved it. Unfortunately, however, Puerto Rico had a couple things stacked against making it the ideal trip: 1) It was rainy season, and 2) Up until the moment of departure, Hurricane Tomas had been threatening to show us why. Not that this is the fault of the Island; it was more our own fault for choosing November than it was Puerto Rico's for being located in hurricane territory, but we hadn't realized how much of the activities really depended on not even necessarily beach weather, but just good, non-rain, weather. 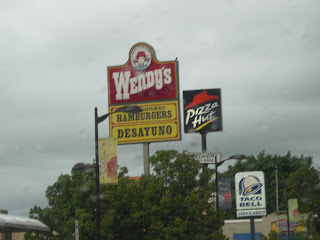 The other item stacked against it (again not the island's fault) is that my itchy travel feet usually require that the trip be outside of the country in which I am becoming restless. I was hoping that Puerto Rico, though technically American soil, would be foreign-enough, with its Spanish language, island atmosphere and old colonial style city. It turns out that there were just enough fast food chains, of every type, to make it hard to forget that I was not in any one of the 50 United States...

Don't get me wrong though! There were many, many things I loved about the island. The colors of the buildings in Old San Juan were magnificent; not one color was left out. The blue-hue of the cobblestone-type streets. The salsa, bachata and merengue music on majority of the radio stations and emanating, it seemed, from the buildings themselves. And the lovely people who were kind with my botchy-Spanish and refused to treat us like outsiders. 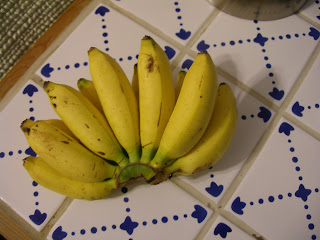 As per my usual, a trip to the grocery store also afforded me much pleasure. I bought all kinds of things that, though housed in the same type of mega, multi-aisled, traditional American supermarket, you cannot readily find in the mainland U.S., of which, tropical fruit was high on the list. I bought mini bananas (do these have a proper name?) and a papaya which, turns out, is too big for one person to eat in a single setting. 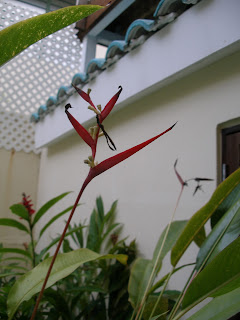 I also loved the different plant life: birds of paradise, ginseng flowers, palm trees... all those helped to feel like I had left one world to join another. For this reason, the island's rainforest, El Yunque, was at the top of this list. It did not disappoint.

There were waterfalls, beautiful yellow and red tropical flowers, lush overlooks from various elevated points, and though you could not see them, the island's famous coqui frogs serenaded you with their unique sound, in fact: "coqui- coqui." Rain did keep us off most of the trails. It also kept us from my other desire for the trip, the bioluminesecnt bays. These bays, only found in a few places in the world, are ones lit up at night by micro-organisms living in the water. You can kayak through the bays at night and have the water glow just because of their presence. It sounded immensely cool, and I was pretty disappointed that Tomas's remnants made the idea less enjoyable, if even feasible.

However, for me, the important things on a trip are the company, which was unbeatable, and the little daily things: getting to try a mallorca sweet bread with my caffe con leche for breakfast one morning...

having mofongo, a mashed green plantain dish that houses either meat or seafood, for dinner in a pretty kitschy, over-the-top Puerto Rican restaurant one evening...

and taste-testing various rums at the Bacardi Distillery... Each of these were enough to make my trip a success.
Labels: Puerto Rico Tourism Travel