Postcard from Cory at the Maryland State Fair! 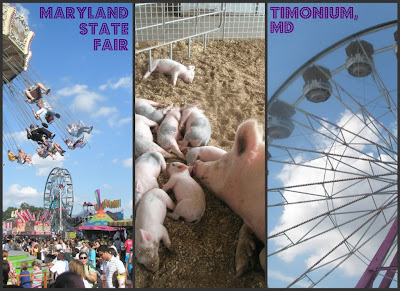 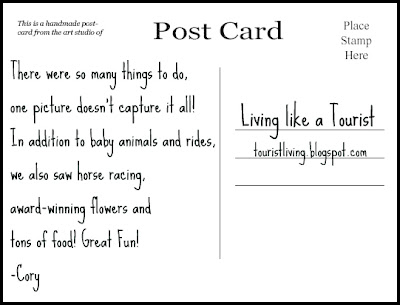 What is a State Fair, and why should I go to one?
State Fairs have a long history in the United States. Tied to its agricultural roots, it was a place to show off one's prize crops and livestock. The earliest fair in the U.S. dates to 1841 in Syracuse, NY. Maryland's own State Fair history began in Lutherville, MD in 1878. However, the Maryland State Fair has had a volatile past and has almost died out multiple times due to various obstacles- such as a train tracks laid down on the grounds where it was held, competition from other fairs, the war effort and a near sale of the grounds by the majority stockholder.
Oxen competition, home arts, farm and garden products, and livestock shows used to be the primary attractions of this fair, a tradition that the current fair has maintained with its flower and crop competitions and its livestock area, where you can milk cows and witness the birth of animals (such as pigs as seen in the postcard above). Horse races were also part of the State Fair tradition, but in that day in age, carreir pigeons would transport the results to interested parties in Baltimore and Alexandria.
Food concessions have also evolved from sandwiches made by the farmers’ wives to hot dogs, hamburgers, fries, cotton candy and other modern fair-type foods.
Over half a million visitors attend the Maryland State Fair every year. Like drive-in theaters, State Fairs mark a part of the United States's tradition and culture.
Want to visit? The Maryland State Fair generally takes place at the end of August/beginning September, in the 11 days before Labor Day with the last day on Labor Day Monday.

To see what State Fairs were like back in the day, visit Time: A Brief History of State Fairs.

Where are you?
Send me a postcard! Just take a digital photo, write a 2-3 line message and send it to touristliving(at)gmail(dot)com! I'll turn your photo into a postcard and post it on my blog to share your experience of living like a tourist in your own city. (Remember: whether you are living in Duluth or Dubai- I want to hear about the interesting or unique aspects of your city!)
Labels: Maryland postcards