Outfields for Operas and Trucks for Food: My week in D.C.

I thought I'd take a little break from postcards to get back to talking about the city I am living in and my, perhaps overly ambitious, list of 365 things to do in D.C.

This week, I have done quite well in exploring unchartered venues. My week of new adventures began with an $11 (!?!?!) imperial stout, a cask ale if you will, at Churchkey. Cask ales are unfiltered, unpasteurized beers and are served closer to room temperature. This old school way of making beer is still quite popular in Britain and is starting to make its way to the U.S.


I also went to the Nationals Baseball Stadium for the first time, but not for the obvious reason. Instead, I went for "Opera in the Outfield," a simulcast of Verdi's Un Ballo in Maschera. As bizarre a combination as opera and baseball is and as weird as it was to stand up for the national anthem before the first Act and to have t-shirts flung out to the crowd during intermission, I did enjoy being outside, sitting in the grass, on the beautiful day that it was, all the while listening to Italian opera. (did anyone else notice that I am not doing so well in the "For Sport" category of my list?)


A couple nights ago, I ventured to Cleveland Park's Cacao for a Parisian macaron. To my grave disappointment both the lavender and the pistachio macarons were out, so I got a banana and an Ecuadorian chocolate one-  which as a combination somewhat made up for the lack of my first two choices.

For the first time in my life, I went out for cereal, and to do this, I went to the appropriately named The Cereal Bowl. I actually couldn't bring myself to purchase plain, cold cereal (I have that at home every day). So I bought frozen yogurt with cereal topping, really just an excuse to have Lucky Charms. (I am WAY too old to buy a box of that now, at least without the excuse of giving it to my child or something). However, I will say that a serious oversight in their fairly sizable array of cereals is the omission of Count Chocula cereal. (That cereal I WOULD buy at the store, no matter my age... if I didn't care about things like my "health.")

Although it would have made sense, I did not get coffee along with my cereal, but the next day, I did go to the Illy Caffe at the corner of New Hampshire and M streets. Illy always draws me to it, like a cartoon led by its nose following visible aroma waves. My coffee sensor led me here on Wednesday, and I was pleasantly pleased by the cappuccino. It is terribly hard to recreate Italian cappuccini outside of Italy- even the water plays into making coffee taste like it does there and not like it does here. However, the Illy cappuccino (at about half the price of Starbucks to boot!) was lovely all the same. I was also amused by the "qua" and "la" prices, a bit like the al banco v. alla tavola prices in Italy. Except, interestingly, Qua (here/for here) is less expensive than La (there/to go) whereas to sit with your cappuccino in a Roman bar will cost you more than to take it, essentially as a shot, at the bar (i.e. their version of "to-go").

R.F.D was another spot that I crossed off my list this week. I can't say that I am a fan of this place, but I did find a tasty hefeweizen there, which I think was of the Harpoon variety. I would perhaps venture back there to try Founder's Breakfast Stout though which, had I known it was on the menu, I would have had in the first place. 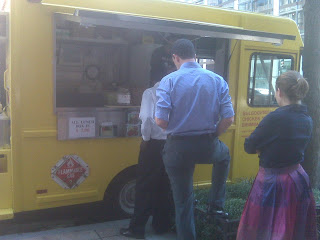 And today, I took a brave lunge into DC mega-craze, the food truck phenomenon. It has perplexed me that this trend has had such a following; there are maps, blog posts, twitter discussions etc. all centered on where, when and what food trucks would materialize in any given area of the city. Really? Are these not glorified hot dog stands with day-old food and questionable sanitary records? Well in fact, no (at least I hope not on the sanitary front). These are elaborate meals with side dishes, sauces and other flairs that are a far cry from a boiled piece of meat on two slabs of bread. I happened to go to a Korean food truck (Yellow Vendor Bulgogi Truck) and had the only vegetarian option offered, Bibimbap, which was really quite good, especially the kimchee! I intend to go on about kimchee in another post though, so i will leave it at that for now...