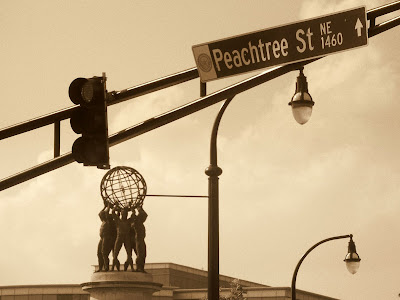 Almost 9 years after I graduated Emory and left Atlanta, I find myself back here on a training. And it has definitely been a walk down memory lane, or Peachtree lane in this case. However, the Atlanta in my memory hasn’t been matching the Atlanta I am visiting now.

I suppose this is not surprising. Nine years does a lot to an already burgeoning city. Buildings pop up, museums expand, parks are revived… And then there is the intangible change… the loss of a city that I knew through the eyes of a college student, living for the first time on my own, in a city much larger than Baltimore.

This recent trip, after years of living on my own in countless big cities in a variety of countries, as a worker instead of a student, has given me a different lens from which to observe Atlanta. 9 years has also washed away the majority of my associations to the city. 99% of my friends have scattered since college, not many of them having been native to the area anyway.

Yet determined to rediscover this city, I began my trip as a proper tourist, as is my modus operandi, with a camera and a “Where” magazine in hand. 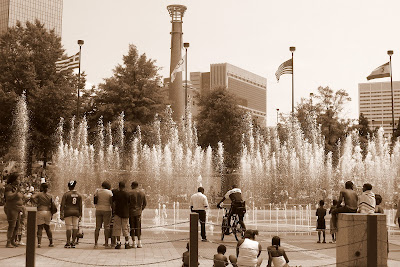 One of the new sites that was entirely envisioned, designed, constructed and opened to the public since I left is the Georgia Aquarium- the largest aquarium in the world. If you had read about my “critter craziness,” it won’t shock you to hear that this was my planned target for my one day out of trainings. However, one hour of MARTA commuting and 3 hours of a grumbling, lunch-deprived stomach later, with a Disney-roller coaster-ride wait ahead of me, I decided to veer off course and watch the World Cup match: US v. England.(After explaining my logic in my last blog entry, you might be curious as to my loyalty for this game: I routed for the US.)

Match over, I decided that it was too late in the day to explore the world’s largest aquarium and instead decided to see Atlanta via Peachtree street, the aorta of Atlanta. This “great” idea sent me on a mini Camino de Santiago de Compostela.

You see, in a car (and those are the magic words), Peachtree seems long but manageable. By foot, Peachtree is a mammoth of an urban hike, a virtual cement Appalachian Trail. There were bridges, winding roads, uphill climbs and long descents… none of which I had remembered about Atlanta.

Like the Appalachian trail or Camino, very few people undertook the challenge, perhaps knowing or better remembering the distances and humidity- a combo Atlanta serves in hefty doses. Therefore, I often had the trail to myself. The city was so clearly not a walking city that it was easy to replicate the solitude of being in the woods, and accordingly my mind began to wander.

One interesting thought that came upon me was about past loves. Atlanta was not only my first away-from-home and city-life experience, it was also the setting for my first love. So walking past various sites and intersections was almost like seeing a movie reel in my head of those days. With all the changes in the city, I was surprised to see one restaurant still standing: Baraonda. 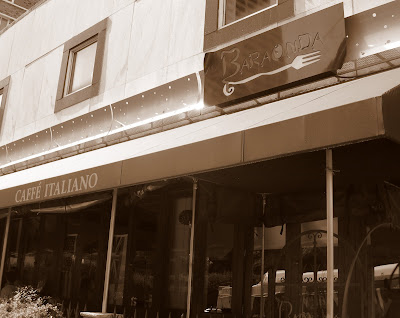 I was astonished to see that, not only was Baraonda still standing 9 years later, it had also tripled in size to include an attached wine bar and an outdoor terrace. This made me marvel that, in such a tough business, some restaurants go bankrupt after only a year, but others, like Baraonda, can triple in size, gain momentum and become a stable institution... much like relationships.

My random musings were only interrupted by my trigger happiness with my camera, "old reliable." However, after 3 hours and over 5 miles of walking, I had exhausted my will to be a tourist and instead opted for a refrigerated seat (buildings in Atlanta are refrigerated, not air conditioned…)on the MARTA train back to my hotel.

As a tourist, I am still not sure how I feel about Atlanta. My one day of exploring has not been thoroughly comprehensive and on my list are still visiting a QT gas station for their endless combinations of caffeinated drinks, drinking a blueberry Sweetwater beer, partaking in a southern sweet tea, eating a Georgian peach, and attending a Braves game. I had grits this morning- so I have crossed that off my southern experiences.

Yet, while amusing myself in re-exploring Atlanta, I have a feeling that the Georgia on my mind might not be the Georgia I am in.
Labels: atlanta georgia Tourism