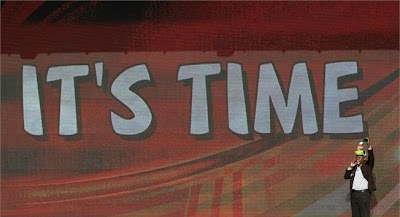 Of course, international competition always brings up the question of nationalism which is a difficult one for me. However, I have recently reconciled this by labeling myself “pan-national,” which I define as having ties to all nations. Therefore, which team I route for often depends on who’s playing that day- if Argentina is playing Brazil, I will route for Argentina because I have been there, loved the people and was enchanted by Buenos Aires. If Korea is playing Ghana, I will route for Korea because I have a lot of Korean friends and often feel like a token Korean. If I have no leaning toward either team, I will either route for the home team or the underdog. If the U.S. is playing Paraguay, I will probably route for the U.S. because I don’t have any particular attachment to Paraguay. However, if Italy is playing the US, then… I apologize to all my American friends. It stands to reason then that if Italy is playing at all, that supersedes all other logic…

Which brings up my next point: I usually get in a lot of trouble during the World Cup season. I remember being in Italy, watching a U.S. vs. Germany game, in an American school, with mainly Italians and some Americans, during the time that I was dating a German… As you might have guessed, my American classmates were not amused by my loyalties.

This is why the label pan-national is a much better fit for me. I feel linked to many countries because of the experiences I have had and the people I have known from each. I am legally American and Canadian. I am ancestrally Egyptian, Syrian, Armenian, and I suppose, far back enough, French. I am Italian “nel mio cuore” (in my heart). I have ties to Ireland because of my sister. I am Korean by association. For the same reason, I would say I have also recently become Serbian. A part of me is still German from my time there. So I feel connected to a lot of the world, and perhaps what I like so much about the World Cup is not the competition, it is the worldwide stage- the pride in different countries- the buzz shared in all time zones- and the excitement that vibrates across oceans.

So pick a flag and raise it high. My heart requires my support of Italy, but in all likelihood, I will route for your country at one point or another as well.