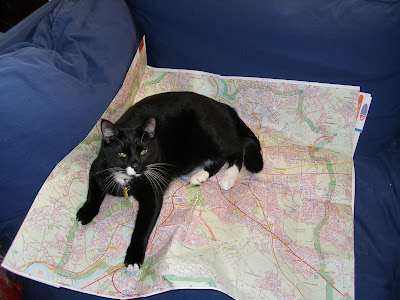 I have one other travel accessory that I have not yet mentioned. It is not the type of thing that you would find recommended in Travel & Leisure on packing checklists. It doesn’t come in a 3.0 ounce travel size bottle, and it doesn’t fit comfortably into a suitcase. In fact, most would recommend that you NOT make this a regular travel accessory. I am speaking about my cat: Matteo.

Moving around every other minute was not my original idea or intention when I adopted him 4 years ago. On the contrary, it was during a relatively calm period of my life when I thought that perhaps I would sit still for awhile. However, I was entering the exact opposite phase, which I take as proof that the Arab saying “Man plans, God laughs” was coined because of people like me.

Anyway, 9 months, 3 vaccinations, 1 microchip, a slew of medical papers and an airline-approved pet carrier later, we were on a flight to Rome- me and kitty. There are only a few airlines that will allow pets on board with you, and I am very thankful of those because the idea of sending a pet off to be handled the way I have seen bags handled (particularly at Fiumicino) makes me more than a little anxious.

However, even on these airlines, pet travel is far from easy. The pet requires a separate reservation. Only 3 pets can be in the cabin at one time; there is a pet-carrier weight limit, and the carrier must meet certain dimensions and manufacturing requirements.

My favorite (sarcastically favorite) part of the whole thing is going through the medical detector with him. He can’t ride through the x-ray machine any more than we could. So this means I have to remove him from the bag and carry him through with me. Matteo is not a small cat. He is not fat; he is however surprisingly long, which makes him look large. So taking big, freaked out Matteo out off his bag in a loud, noisy, bustling airport is not like slipping a laptop out of its case. He clings to the bottom of his carrier with all ten claws as if he is falling off a cliff, and I have to yank him out and hold him still through the detector. Seeing this long, frightened cat in the arms of a short, relatively small girl, I usually hear: “Ma non e un gatto. E un gattone!” Translation: “That’s not a cat; that’s a mega-cat!”

Aside from the airport trauma, (which I believe is becoming increasingly traumatic for humans and cats alike), Matteo handles the trip shockingly well. Barely any meows (none you can hear over the sound of the plane’s engine), no throwing up, no peeing, no panic attacks or any other behavior that would indicate that cats do not generally fly 9 hours across an ocean to a foreign country. Matteo is a natural.

Unlike pets traveling within the EU, Matteo does not need a passport, but if he did, he would have stamps from Italy, Germany, France, Canada and the U.S.A. Two of those were layovers, but he has also lived in Baltimore, Rome, Montreal (for a couple weeks) and Chicago.

I don’t know if he took on my personality traits when it comes to traveling, or if I managed to uncover a cat with a similar gypsy soul. Yet, whether or not he has an intrinsic desire to travel and despite the cumbersome (at best) hassles of travel logistics, Matteo is my favorite travel accessory. A hair dryer makes lousy company.
Labels: Cats Flying Travel