The Paris of the Mayan World

A couple of things stand out about our two day trip to Copan, Honduras

1- When it comes to driving in Guatemala, Google maps suck.
2- All immigration officers should be as nice as the Honduran officer allowing us into his country
3- Cowboy hats are THE number 1 fashion piece in Copan

Of course all of this is secondary to the Mayan ruins, which were the actual reason that we went to Copan. To quote our enthusiastic and elaborative tour guide: Tikal’s vastness might make it the New York of ruins, but Copan’s elaborate designs make it the Paris of them. 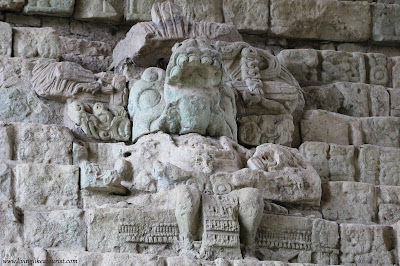 The northern part of Central America has your pick of Mayan Ruins. Being in Guatemala the obvious choice would have been Tikal. But it is a 12 hour bus or 1 hour flight away from Antigua, about twice the distance of Copan. Also, as the preeminent tourist destination in Guatemala, Tikal’s cost for a weekend was $300+ per person which was more than we wanted to pay. Copan by contrast was not as touristy and within driving distance: 6 hours by Google's estimate. Of course, if you refer to my points above, Google should never be trusted, particularly not in Guatemala or Latin America in general.

Even if you forget about Google’s deficiencies of not recognizing the major highway and not computing the standstill traffic that we were in, we also had the misfortune of leaving on the Saturday of the Caravan del Zorro, the weekend when 40,000 motorcycles make a pilgrimage to the Black Christ in Esquipulas. It was the exact same route just one hour closer than Copan. Of course, we only found this out after the fact. 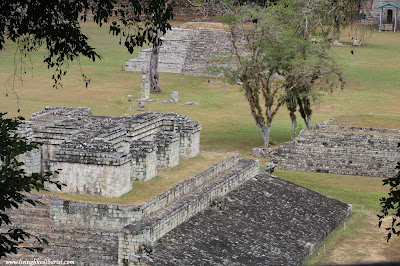 Long story short, we arrived in Copan 10 hours later, not 6. Ten hours in the car makes Karen a grumpy camper. Arriving at dark, made it worse and we started fearing that the El Florida border crossing might close. (It doesn’t by the way. It is open 24 hours a day). However, because it is generally not considered safe to be on the roads after sunset, we were the only ones arriving at 6pm. So the border crossing was all ours. The Honduran Officer was more than happy to see us. He thanked us profusely for giving him our passports, for each finger that we put on the scanner, for letting him take our pictures, for the entrance fee to the country. He was smiley, polite, respectful and kind. A great welcome to a new country. We liked Honduras already. 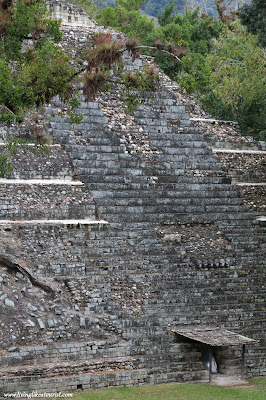 The next day, at its 8am opening time, we tackled the ruins. When visiting any ruins you need to bring your imagination. Even though the ruins at Copan are in very good shape, half of it is still buried under years of soil or overruled by trees extending their roots. Another good portion was gone altogether with the passing time.

We rightly determined that we should get a guide because, like the Roman forum, walking around an archaeological site on your own with the 3-4 signs is essentially like wandering around a grave site. It is a very important site for many people, but unless you have family there, the gravestones' names and dates mean nothing to you. The same with ruins. If you don’t know the story, it is hard to feel moved by the significance of a place. Our guide was a very knowledgeable, go-lucky, playful man who, you could tell, liked his job and had pride in Copan. He was the one who compared Paris to Copan and I get the sense that were he ever to visit Paris (or perhaps he has), he would still rank Copan above it.

The hieroglyphs which are more numerous here than in any other Mayan site are still indecipherable to the average human. I would have loved to be that symbologist that shows up on a site and can read a statue, an altar or the façade of a temple just by understanding symbols, but sadly, I am not and even learning about them on our tour while I photographed them my only take-aways are the bug-eyed guy, the monkey-looking thing, the teeth of something or other and the generic Mayan king/god. I do remember the dancing jaguar though because that was particularly funny and stood out.

With or without a guide though, Copan does have a magical sense to it. It engages all of your sense. At eight in the morning, you can smell the dampness of the surrounding forests in the air. You can hear all the birds chirping away, happy that the dawn dispelled another night. You can almost taste the papayas and coconuts ripening on the nearby trees. Your eyes can easily feast on the hieroglyphs and intricate statues. And as an outdoor museum, you can touch the steps and stones that made up this medieval, civilization. 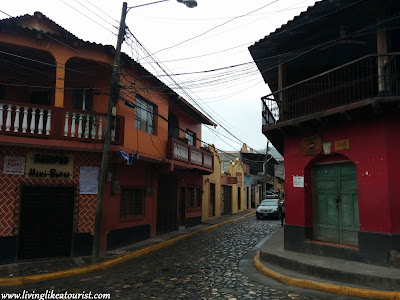 The town has adopted the name of the ruins, Copan Ruinas town. However, it just barely qualifies as a town. Perhaps more a village than anything else, it has three main stretches of activity all with businesses generally feeding on tourism: 2-3 hotels, some restaurants, a couple bars – juice and regular ones - and strangely enough, pharmacies. Perhaps these also fed on tourists. 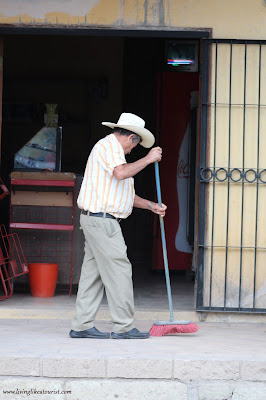 One other thing was clear from the town of Copan Ruinas: the cowboy hat ruled. It was ubiquitous. Even more than the cities I have been to in Texas, or the west of the US, the cowboy hat here was the rule not the exception for the men of the town. It was probably the one and only real fashion statement. Coupled with all the trucks, many of which had seemingly taken mud baths, this town was not afraid of hard work or getting dirty.

Like Guatemala, you do have to take safety into account when visiting Honduras and take some precautions. Copan, like Antigua though, is a bit of a haven. I am very happy though that its reputation for being unsafe is not the only thing I know about Honduras.

Aside from being safe, Copan was interesting, intriguing, and a historian’s mecca. I am glad we visited the Paris of the Mayan World. One day I will also make it to its New York.
Labels: Copan Honduras Mayan Ruins