Our intimate experience of one of Vulcan Fuego's eruptions, in addition to seeing three volcanoes on the way to pretty much any errand, has made me a little volcano crazy. A volcanophile… if I can use an invented word. 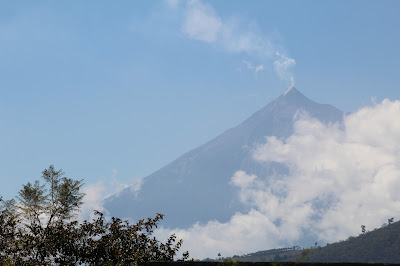 I have researched these Guatemalan volcanoes that I am living with now and, for fun, read about the Italian volcanoes that I lived with before. I have listened with awe to stories from locals and from others who have lived through the eruptions, like the Mount St. Helene's eruption. 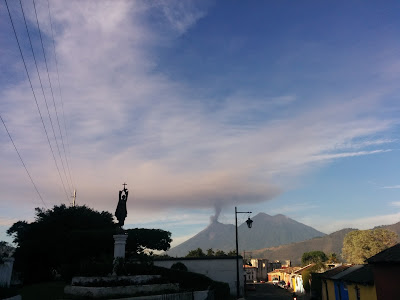 For the Guatemalatecos it is just another fact of life, like disease-bearing mosquitoes or 5 months of rain; you give it some thought, but you move on with life. For me, active volcanoes are not just another hill on the horizon. I never get sick of seeing Antigua's three volcanoes. It was like walking by the Colosseum every day. I was still thrilled to see it. I think volcanoes fascinate me so much because you really never know what to expect.

From day to day, they look the same, but there is always something boiling underneath. In my latest research, I learned that an active volcano is one that has erupted at least once in the last 10,000 years. That is not a small amount of time. If it is actively spouting like Fuego or Pacaya its status is considered erupting; if it is quiet like Acatenango or Agua it is considered dormant, but still technically active. A volcano is only called extinct if it hasn’t erupted in 10,000 years. So most volcanoes we see or hear about are dormant, i.e. sleeping.

What a weird thought that any day some of these sleepy giants will wake up and change the world of people around them.

My husband mentioned to our Spanish teachers, in his teasing manner, that he doesn’t need to see any volcanoes because he lives with one. I thought about this particular insult/joke and in the end, I agree. I think I am like a volcano. In fact, I kind of relate to Vulcan Fuego. I am quiet for the most part of the year, unassuming, even unremarkable sometimes, but like Fuego, I can become a force to be reckoned with. When I am awakened by something that makes me upset/angry/excited, I erupt and the fireworks can be quite shocking. But just as quickly I can go quiet again.


My teachers always told me that of the volcanoes in their midst, the one they fear the most is Agua or Acatenango. They reasoned that when volcanoes are always erupting a little, then you know that it is not likely to have a completely devastating eruption. Whereas the ones that are completely quiet for many years, can be devastating when they awaken.

Isn’t this just like humans? The ones that let out their frustration, anger, sadness or emotion a little at a time, even if it is shocking or awe inspiring at the moment, are not as dangerous as the ones who keep quiet for long periods of time, because at some point and some time, there will be an explosion and people around may not be ready for it.

You can’t make water like fire, any more than you can make Volcan Agua like Feugo, but for those people in your life who are dormant, it might be good to give them a small nudge to see if you can awaken the beast before the unexpected eruption changes the landscape for good.