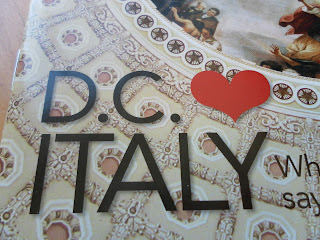 The cover of Where magazine this month struck me as poignant: DC hearts Italy, a feeling that resonates for me in my last month in DC before heading off to Italia. 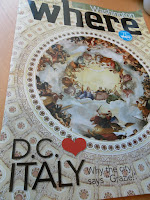 Forgive a little bit of solipsism, but it is as if Where is helping my transition!
The article discusses the numerous ties that DC has to Italy (for example, did you know that the District of Columbia is named after Christopher Columbus?) and further reveals a number of ways to celebrate Italia in its 150th year of reunification!
Well, I have partaken in many of these Italian-focused events (don’t I always?). Here are some of my thoughts on these experiences:
Puccini's Madama Butterfly
Around DC somewhere, on the Metro, at a bus stop, on various neighborhood bulletins, you have likely seen a poster of a pale faced, pitch black haired, beautiful, young Japanese girl, advertising this heart-wrenching tale of naivete and hope being held up like a precious, fragile glass ball and then dropped from a 20-story building. The glass shattering into a million fragments is the story of Madama Butterfly. Despite the fact that the lead vocalist was neither young, pale, black-haired nor Japanese and that, at least for me, she didn’t seem to capture the essence of a young, innocent, Asian girl neither with her acting nor her looks, the rest of the cast made up for it with strong, melodious voices and with a stage setting that was fascinatingly minimal yet completely effective in transferring you from the Kennedy Center to Nagasaki. And listening to Puccini's Aria, Un Bel Di, will definitely have you celebrating Italia.

The last showing is March 19, but for a taste of this Opera, check out NPR's Introduction to Madame Butterfly.
Pizza Napoletana at 2Amy's


At the risk of being stereotypical, what does pizza invoke if not Italia? Despite my two previous failed attempts to have dinner at 2Amy's, times where shear hunger outweighed the appeal officially certified pizza, I ventured back there for lunch this time, convinced by a DC Native's oath that this pizza would rival those in Italy. A bold claim; I had to try it. Encouraged by a ten minute wait, instead of a 45 minute one, I realized lunch was the way to go with this little restaurant, inconveniently located away from metro stops and most major hang-out areas, yet sought out nonetheless.
Despite the intriguing and befuddling menu which included everything from donuts to braised fennel, I did not even think of ordering anything but the pizza. I chose the Etna, and an explosion it was: eggplant confit, black olives, oregano and grana; it was a very seriously flavored pizza. To my surprise though, it was the taste of my friend's margherita pizza that convinced me that he was right and that the D.O.C. certification actually means something, i.e. established to protect and promote authentic Neapolitan pizza. Apparently, it is in fact their Margherita and Margherita Extra (tomato, mozzarella di bufala, basil and cherry tomatoes) that are certified. And now I know why. It tasted like Napoli: the crust, basil, cheese and tomatoes all tasting like they magically do in Italia. Impressive. Up to this point, my general rule had been to avoid Pizza Margherita. After seeing a lot of soggy, bare, runny cheese pizzas entitled Margherita, it made me believe that this title was only a poor excuse to be lazy and make a simple pizza. However, as with most things, if it is done right, simplicity is best. 2Amy's Margherita is one of those cases. 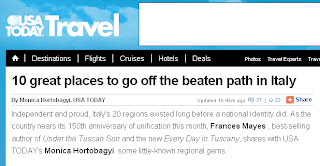 And if you need one last way to celebrate Italia, plan (or a dream) a vacation there and consider visiting some of Italia's lesser-known, but just as amazing, gems. This USA Today article, written by my good friend Monica, gives you some great ideas in the form of favorites put forth by Frances Mayes (author of Under the Tuscan Sun).

Ancora di Più!
Some other ideas from the Where article, (and incidentally also on my list!), are "Roma" paintings at the Phillips Collection, the Franciscan Monastery and the John Paul II Center, among others. Viva Italia!