Strapping on the fanny pack... 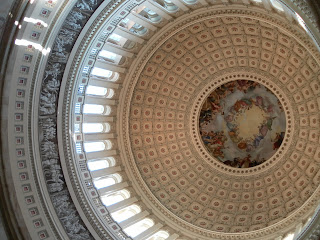 In my first ever blog entry, I defended the tourist. Not in the "Fanny packs are OK" vein, but in the "opening your eyes to the ordinary" kind of way.

I grew up outside of Baltimore and had visited Washington D.C. as a tourist many a time before moving here, but, as many locals do, I never bothered doing the MAIN tourist attractions always with the excuse that there would be another time. 32 years later, I figured that was a rotten excuse, and I decided to hit the big dawg tourist sites of D.C.: the White House and the Capitol.

My "some other time" excuse had in recent years been compounded by the added layers of complexity in actually trying to visit these sights. Gone were the days of obtaining tickets on-site on the day of the visit. Like seeing someone off to their airport departure gate, that was a tradition of old. Instead now, you have to contact your Senator, or in the odd case of D.C., the Congresswomen and request a ticket application form.

Once her office responds to you with said form, then you give all your personal identifiable information and you are investigated by some federal body to ensure that you are clean. The Capitol is not quite as strict; background checks are not run (I think). Regardless, you need to be approved, tickets need to be sent to your inbox and you need to show up at a specific hour and place with proof that you are who you say you are.

Oh and one more thing: don't even think about showing up with a fanny pack (I hope you wouldn't), but in that respect this blog post is misleading. No bags of any kind are allowed into the White House. A purse? Nope. A CVS bag? Nope. A camera bag? Nope. (And a big NO to cameras too BTW). So if you intend on doing sightseeing for the rest of the day, tough. There are no lockers and the offense of having a camera or bag will have you turned away at the gate.

I read all these provisions beforehand and was prepared, though VERY grumpy about the thought of leaving my camera behind for a day. We brought a car to stash our personals as a compromise, paying the city 6 dollars in parking for that right. 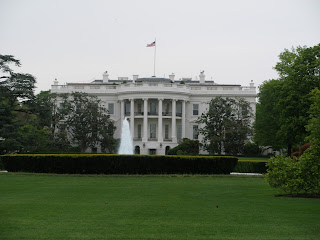 The White House
It's nice. Of course it's nice. It is even homey. A friend of mine commented that this was his favorite aspect of the White House, that it felt like a home and wasn't some ostentatious residence that was intended to awe and belittle guests. Through this perspective, I agree that this a unique characteristic of a Presidential domicile.

My favorite parts, more than the five or six rooms we were allowed to see, were the photographs (of course) of the various presidents with guests or pets, formal or informal, in the garden or in the Oval Office. Those seemed to give life to the house, moreso than the empty rooms and antique furniture.

Overall, it was neat to be inside a house so often mentioned and featured on the News, in movies, television series etc etc. I would have preferred of course to have seen the President inside his residence, but meeting Mr. Obama doesn't seem a likely goal for my quickly vanishing year in D.C.

The Capitol
Also nice. Sorry for the lackluster adjectives. I suppose for me these places felt a little empty without seeing them in context: a congressional hearing, a White House party etc. The buildings are ultimately functional but without seeing their function, the tours were a little flat. The Capitol did have a lovely dome and beautiful Roman columns. The room below was my favorite. Again though, we saw about half a dozen rooms and only encountered other guided tours... no law-making hoopla. 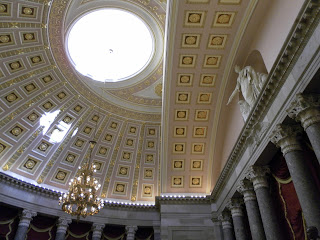 For an American History buff though, I am sure that more could have been gained from these visits, acknowledging the different paintings and statues featured. I, on the other hand, probably came from some type of sociological standpoint and found odd things interesting like the fact that a statue of the inventor of the television was featured in the Capitol. Fairly telling of society I would say. I also remarked how close of a semblance the statue of Reagan had to his real person, and found it disconcerting that I am at an age where I remember the living days of people who are now being commemorated by statues: Pope John Paul II, Mother Teresa, Walter Cronkite, Ronald Reagan... I suppose that is a trend I should get used to.

Senate Bean Soup
My one mission in which I failed on this visit to the Capitol was to try the only food that I have come up with as native to D.C., Senate Bean Soup. I hoped that the cafeteria would have it so that I could sample a bowl, but alas, no. Granted, unlike Maryland crab cakes or Philly cheese steaks, Senate Bean Soup is barely known outside of (or inside of) the District, but I make it a point to try "local" food traditions, and that is the only one anyone has been able to tell me about for D.C. But I found the recipe, so perhaps that could serve the same purpose... and would allow me to remove "ham hocks" from the mix. I don't know what that is, but as a vegetarian, I waive my right to know. However, on that topic, check out this blog post with other "Iconic Local American Foods."