Putting the O and M in RANDOM 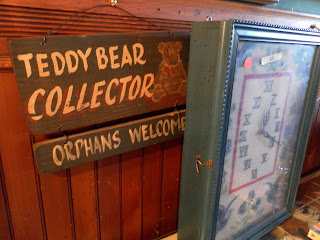 This past weekend, I went on a Living Social-inspired adventure: afternoon tea at the O street Mansion in D.C., then a scavenger hunt through it 100 rooms and 32 secret doors. Not your average D.C. adventure, so of course, I liked the idea.
However, I was a bit skeptical of the description:

Most items are donated from people who visit, just like you, which adds to the joy of looking... It is so much fun searching around for treasures to own -- and having an excuse to get lost! ...You may want to bring your own shopping bags --  as almost everything you see on your hunt is for sale.

It kind of sounded like a hoarder house or an indoor garage sale where we would be served high tea by butlers. Odd.

And indeed it was just that, odd.

There were 4-5 elegant rooms (when you look past the knick knacks on each table) set up for tea and a large room for the buffet. However, you quickly notice how the angel salt and pepper shaker and the inspirational CD laying on your lace tablecloth in an 18th century mansion makes for a off-kilter vibe. The posters of Alice in Wonderland (with crazy-eyed Johnny Depp) were strewn all over the house, making you aware of, if you hadn't already noticed, the connection between yourself and Alice. 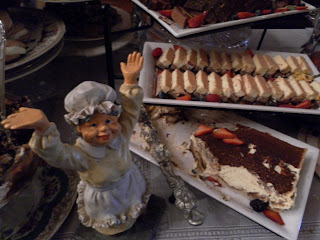 Why random, you ask? Let's start with the Buffet. When I think high tea, I think scones, crumpets and other British-sounding bites. Perhaps some cookies. O Street Mansion had scones, true. It also had jelly beans, spicy mexican dip, tiramisu, full-sized hershey bars, twizzlers, whoopie pies, a bowl of sprinkles (I don't know what for), dried fruit, and two massive and messy plates of assorted cheeses, but not of the refined french variety, of the everyday, grocery store kind: Munster, cheddar, swiss.

Another oddity: when I walked in and past the first couple tables, I pushed a mug away from the edge of the table, seeing its precarious position and likely iminent fall. Later, sitting eating my jelly beans and cheese, I noticed that all the mugs were positioned at the edge of the tables, deliberately. Asking a worker about this, she answered that is how the owner/manager has them do it.


Here are a couple other mental snapshots of the house for you to get a proper picture. On the fourth floor, one of the first rooms you see is a bathroom, and in the bathroom a toilet... with a sombrero on it. Down the hall, a bedroom with high shelves filled with old dolls and stuffed animals, complete with a mighty cruddy looking panda if I do say so. Closets had paintings hung inside them; almost all soap containers were ceramics hands. There was even a self-contained log cabin on one of the floors (wooden beams, animals skin chairs, cowboy hats and an aquarium ... don't know how that last one fits in). 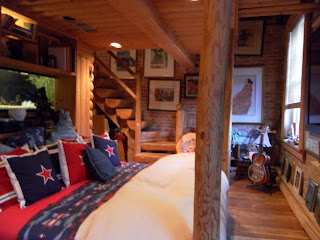 There was also a nod to fake animal hides with another room... ivory sidetables and lamps. An elephant husk table... It was a room that looked like what the wife from the TV show "Married with Children" would decorate. 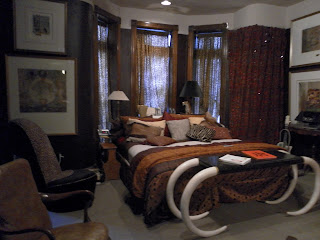 And true to word, not only was every avilable space taken with some item, everything was on sale: spice dishes, old books, paintings, soap dishes... all adorned with price tags.

The sheer amount of stuff everywhere was enough to give you a headache. But to complciate matters further, there was a part of me that desperately needed to amke sense of this house/business/whatever. Why? Why a log cabin? Why a chess board in a bathroom? Why a lone hat on a hat rack in the middle of the hallway? Some recurring themes that also had me puzzled: 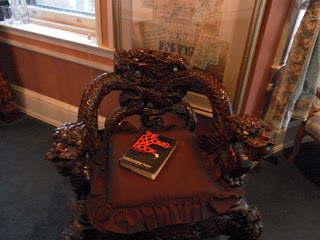 Perhaps I am reading too much into this last one, with as much junk as there is in that house, the occassional not-so-cheery item is to be expected. It just seemed particularly strangely placed.

I like random, in fact, I kind of live for random. And this experience is definitely one worth having, but leaving the house, I breathed a sigh of relief and inhaled as much fresh air as my lungs could take in... I was out of the rabbit hole.
Labels: O Street Mansion Washington DC