The History of Stories 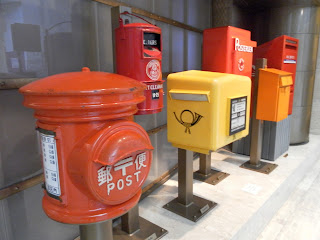 I have a few postcards to share, but first, I thought it would be fitting to write about my random trip through time to a museum that could have been called Nostalgia, and it was likely that exact emotion that drew me to step inside its doors: The National Postal Museum. 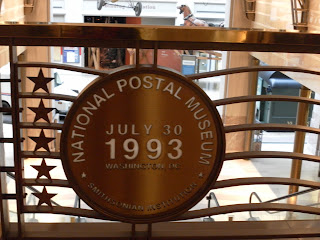 Now why, you might ask, would you want to visit a museum about mail when so many other world-renowned, Hollywood-featured, historically-important ones are within the same two mile radius and equally offer free admission? And this question was the reason for which I was one of perhaps 6 visitors on this Sunday afternoon in January.

Yet, my overly flooded brain, swirling about with memories, perhaps still saying goodbye to 2010 and contemplating more life changes in 2011, made the idea of visiting a small, focused museum, dedicated to the act of writing and its products (letters, stamps, stationary, delivery systems, mailboxes etc) feel reassuring. A simpler time, certainly not easier, but a time when letters and the emotions that arrived with them were perhaps the top form of excitement even entertainment for that village.

As one who is and has often been in long distance relationship, I will sing the praises of Skype, chatting, webcams and other technological advances that make a hard situation that much easier, but I suppose I missed the idea of letter writing. I admit that it is a faux nostalgia, a longing for an era that I didn't quite experience, when penmanship was a great art, when handwriting and letterhead and wax seals and royal stamps were not only an expression of beauty, but also one of utmost importance, perhaps the only information of the outside world. Letters brought news from a lover at war or family in far-off lands. Forgive if I am wrong, but opening an email just doesn't produce the same effect as opening a sealed envelope... 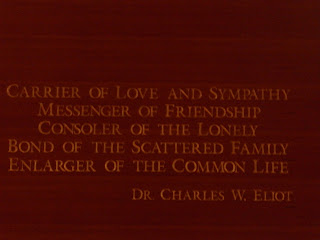 As one who had a handwriting class in school and who had pen pals throughout my adolescence, I am still fond of the handwritten word. Despite my general sense of inertia when it comes to change, I have adapted modern communications (blogging being a proof of that). However, I have not wanted some traditions to perish (refer to my postcard idea.)

So I suppose the mission of this museum spoke to me. I wandered this small but impressive gallery, taking in the history of mail, but really the history of people's stories reaching their intended audiences. Starting from Colonial times and couriers through the time of the Pony Express and the revolution of mail being delivered to homes as a free service, the museum displayed real letters from these time periods, even some from the 1800s and the era of the Homestead Act, describing the challenges and dangers of inhabiting new land.

To me, it wasn't so much the history of the postal service or how it was developed and streamlined, it was the history of who our storytelling and our communications as they condensed from a tale every 6 months, to one every month, to one every week, to modern days where we can tell stories so quickly that we have almost run out of things to say, and so we post other people's stories, the world news, our fleeting emotions and temperaments, giving each whim that much more importance. Would a separated family write from Ireland to her sister in the New World to say that the shower was particularly cold that day or that the rooster was acting up? Receiving it six months later, the sister would no doubt be puzzled as to the importance of this news, and the sender would hardly remember the related story.

I like status updates. I like portraying the small things as significant. I am grateful for an outlet to express silly things. Yet, every now and again, it is good to remember that our stories, our realities, are the larger ones, not the ones at 4pm on a Friday when we are tired of work, longing to go out and hungry after a caffeine crash. How often do we define, describe or even reevaluate our lives by those moments? It might be worth thinking, if I won't remember this in six months, is it worth worrying about it now?
Labels: Life list Museum Washington DC