The Awesome Battle: Nature vs. Man

If you have ever seen the show How I Met Your Mother, then you know that there are many forms of awesome and many scenarios where its declaration is appropriate. Las Vegas and the Grand Canyon, my New Year's destinations, are two of those situations, though quite possibly, polar opposites.

There is no other way to describe Vegas than as an adult Disney World, essentially a place that allows for everything that you could not do as a child. Over-indulgence is another appropriate term: not just of its visitors, but of its creators. Everything is vast, grand, enormous, never-ending, over-the-top or sometimes outright ridiculous. Even if you are not there to gamble, drink or see nakedness (which in fact were none of the reasons I went), you can still marvel at the gluttony of Vegas's creators.Sin city indeed.
To the many devoted fans of this city, I tell you that the above is a reflection and not a judgement. I did indeed enjoy my time there. I found it fascinating to see what people would do with a blank slate (in this case, a desert) when money and power are of no consequence and all logistics can be overcome by the former two. Las Vegas is a social experiment of sorts.

It seems that in Vegas, you either pretend to be somewhere else (Paris, NY, Venice, Egypt, Rome etc) or to be someone else (a richer, sexier, wilder version of yourself). An escape from your own reality (and thus, their key phrase, "What happens in Vegas, stays in Vegas.") But then again, isn't all travel in part an escape?

But enough with sociologically analyzing the city (which I really enjoyed doing), now about my time there:

We started our day by driving up the Strip, admiring the incredibly large hotels and credible replicas of their themes (Venetian, Circus Circus, Treasure Island).

We observed the incredibly numerous chapels, i.e. the infamous scenes of renegade and/or impromptu weddings (my favorite was the Graceland Chapel complete with an Elvis officiant).

We spent exactly $.99 on gambling between the two of us, keeping the 1 cent voucher as a humorous souvenir. We went up the Eiffel tower, had espresso by the Gran Canale, ate sushi in Caesar's Palace and generally enjoyed a lot of seafood (odd if you think about it being in the middle of the desert).

From the outdoor terrace of the little Parisian bistro across the street, we also watched nine of the Bellaggio's varied fountain shows (music ranging from Pink Panther to Andrea Bocelli). I cried in the Venetian because I miss Italy/home. 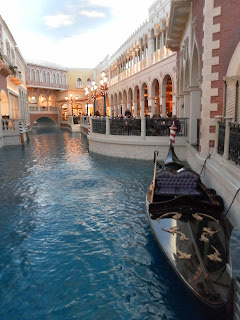 I got a weird water massage from one of those capsule-like machines, and we contemplated going to an Oxygen bar, but never did. We saw a Cirque du Soleil-type show, Le Reve, which took place on a stage-turned-pool-turned-fountain while actor/acrobats came out of water, the ceiling and the aisles of the theater. And we attended mass at a church on the Strip (yup, there is one!) that was full of people and with a choir leader that I guessed to be Christine from Phantom of the Opera in her day job. And that was just the Vegas portion of the trip. 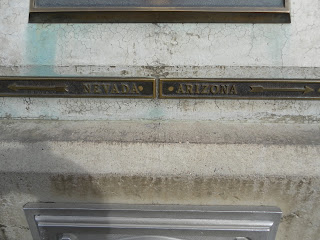 The second and third of our four day trip were spent getting to and staying at the Grand Canyon. The 5 hour drive, a visit to Hoover Dam, stops to photograph cacti and a lunch at a innocuous but sketchy road-side diner (complete with smelly mugs, a "leave your gun at the door" sign, a backroom bar with a banjo player) meant that we got to the Grand Canyon later than we intended, late enough that the sun had set for the day and our introduction to Grand Canyon National Park was of darkness, snow and the occasional tree.


Thanks to the cunning mind of my travel companion, we stayed in a little cabin about 50 feet away from the Canyon's edge. (Their motto: "You're not just near the Grand Canyon, you're there!") And indeed we were, which also granted us the opportunity to get up early enough to see the sun rise over the vast abyss. Finger-numbingly cold as it was, it was undoubtedly worth the exposure to the elements (it also snowed) in order to see the bright orange sun peek out of dark gray snow clouds and cast its web of pinkish light on the red rocks of the Canyon.  Amazing.


This and the mule deer made my morning. Seeing Smoky the Bear as we left the park made his.
In the end, whether it was bowing down to the shear power of water and nature's creation or gawking at man's willpower to create something out of nothing, a city out of desert, both sights were awesome. I leave you to determine which is more impressive.
Labels: Grand Canyon Las Vegas Travel Trips