Weekend of the Vache Enragée

I recently heard this phrase, and in addition to finding it hysterical, it seems to describe my recent attitude towards weekends, tearing around the city like a mad cow (vache enragée), trying as many new things as the daylight hours and my aching feet will allow.

Founding Farmers
This Friday, I tried a great restaurant called Founding Farmers, a certified GREEN restaurant, meaning that they purchase local ingredients from vendors that adhere to sustainable farming. There were a lot of very intriguing items on the menu, "comfort food" as it tends to be called, including grilled cheese with tomato soap, lobster macaroni and cheese, and butternut squash ravioli. Yet, I opted for the fish (I wasn't feeling like being comforted), and it was a good choice.


NEA Opera Honors
Thanks to a good friend who was on the ball with tickets, we were able to get seats to the NEA Opera Honors at the Kennedy Center unlike 1,500 other people who ended up on the waiting list. This night was about celebrating great achievers in the opera world: Eve Queler, Philip Glass, David DiChiera and Martina Arroyo, each geniuses in their own right from producers and composers of opera to administrators and singers. I am not "in" the opera scene enough to have known these remarkable people before this evening, but I left feeling reinvigorated at what passion can do. When you really love your work and you have without a doubt found your calling, great things can happen, and all four of these people demonstrated that. Philip Glass said one particularly toughing phrase about how in some ways he wasn't really born until he was in his 30's, that he felt like "an abandoned baby in front of a house — it was an opera house." He explains, "I want to thank the opera world — they took me in."

Memorials
Saturday, I headed off into the city with a museum in mind. I had my groupon folded in my purse, and I set off determined to make it to the Corcoran Gallery. But the moment I stepped outside, I changed my mind completely. I couldn't stomach the idea of being inside, trapped by four walls, when it was 70 degrees and breezy, with sunny and blue skies. I refused. So I decided that it was the right time to go visit all these memorials that D.C. is so well-known for and that I had somehow bypassed until now. I headed toward the Lincoln Memorial, but I knew I needed to stop by the Einstein Memorial, a little known one on the grounds of the Academy of Sciences building.


A massive, 135 ton, statue of Einstein sitting in a kind of "deflated" doll position with an expression that seemed to be a cross between a fatigued, confounded genius pondering all the insanely complicated things Einstein contemplated, and a gentle grandfather-like countenance that invited his grandchildren to climb on his lap, (which the millions of children at the statue did willingly and obstinately).


Next, it was off to the opposite of this casual, inviting Einstein sitting on the ground, the Lincoln memorial, a formal, classic, rigid Lincoln sitting directly upright, a perfect 90 angle between his back and legs, with his "throne" like chair emphasizing these straight lines. Perhaps uncomfortable, but Lincoln does have a gorgeous view from his open Greek-like temple. He sits and stares out over the reflecting pool, past the Washington Monument, all the way to the Capital.

I next visited memorials that to me, so effectively depicted the horror of war, that I couldn't imagine why we still consider that an option. The statues of soldiers in Vietnam with their incredibly vivid and human expressions, one of a nurse holding an injured soldier in an almost "Pieta" position, and three soldiers clearly comrades facing the wall of 58,000 names of those who died serving in Vietnam.

The Korean War Memorial was just as haunting, also with a black marble wall that showed faces of people in the war, looking like ghosts as the background for a plot of land overgrown with bushes and grass. Life-sized, soldiers dressed for field combat in trench coats and boots and treading through the brush, each again with expressions of pain, concentration and mitigated terror. These memorials were in starch contrast to what my map called the WWI memorial, a round, clean-cut, even distinguished  Greek temple with only the words around the dome making any reference to a war.
I never made it to the Jefferson or FDR memorials. Construction impeded my path there. But I took some photos that made me realize how the time had passed between my first visit to this area and to my recent one. 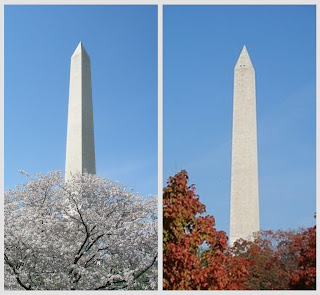 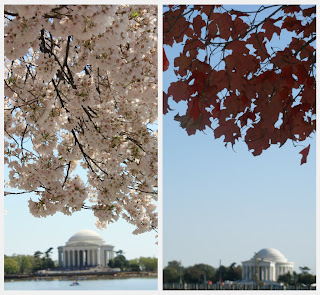 St. Patrick's Church
Sunday it was off to a new church, St. Patrick's, on 10th Street. St. Patrick's Parish was established in 1794 in order to minister to the needs of the Irish immigrants working on the White House and the Capitol building. At first glance, it is a little bare inside, but if you look more closely at the stained glass windows and the paintings of the saints above the altar, there are some beautiful pieces. Its Irish roots are also evident as the windows show scenes of Saint Patrick's life and shamrocks are scattered throughout the art and architecture of the building. The outside is also quite magnificent in Victorian Gothic Revival style, complete with gargoyles. D.C.'s own little Notre Dame.


Chinatown Coffee Company
In between activities, I stopped into the Chinatown Coffee Co. to get my espresso-fix. I was thoroughly impressed by the presentation, and it was definitely a good caffe latte. Oh, how I miss Italy though... (Refer to my snob post... I know). 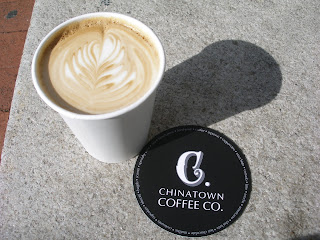 Corcoran Gallery
And finally, despite the sun and breeze tempting me to run around the fallen leaves and bask in the warmth of the October sun, I was determined to visit this Gallery that had been so elusive to date. I missed the Chuck Close exhibit... which was upsetting, but in its place was one by Spencer Finch, an apparent admirer of clouds and their ephemeral nature. A sentiment I sympathized with, I was intrigued by this exhibit. Yet, the abstract, post-modern display didn't quite appeal to me or my own thoughts on art. One piece, however, a series of clouds photographed as seen through puddles on the pavement did fascinate me. The Gallery also had other hidden treasures in their permanent collection from Pissarro and Monet to Stuart and Cassatt. Much more manageable in size than the Smithsonian galleries, it was definitely worth the entrance fee and even more so the groupon and its discounted rate.