Postcard from Matt in Baltimore City! 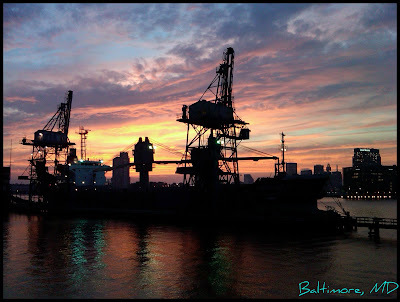 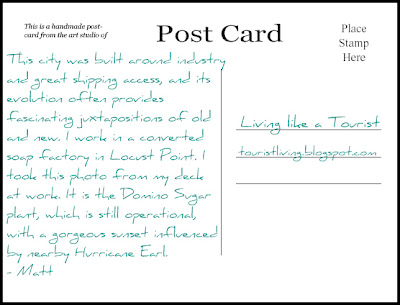 Why travel to Baltimore?
Most people perhaps don't equate Baltimore with sugar. However, the Domino Sugar Plant is definitely a staple on the Baltimore horizon. One of the oldest companies in the United States, the Domino Sugar Company (as the most recent in the evolution of company names from W. & F.C. Havemeyer﻿ Company to American Sugar Refining Company to Amstar Sugar Company) was begun in the 19th Century by William Havemeyer, an English immigrant. The brand name Domino came about in the early 1900's when Henry Havemeyer decided that a trademark name would assure the company greater success, owing to a heightened awareness of the product. The name Domino was chosen because the sugar cubes resembled, take a guess, dominoes.
The company is today owned by British company Tate & Lyle and dabbles more in the artificial sweetener business, however, as Matt mentions, the recognizable plant on Baltimore's skyline is still functional and, according to the Washington Post, even offers tours on the art of sugar making!
If sugar refining doesn't peak your interest, you can instead make your way along Baltimore's Inner Harbor, home of the National Aquarium, Science Center, U.S.S. Constellation (the last existing American Civil War-era naval ship) and Food and Shopping Pavilions. Make sure to stop by another renovated industrial building, now on the Registry of Historic Places, the Power Plant, which today is home to Barnes & Noble, the Hard Rock Cafe and ESPN Zone.
Where are you?
Send me a postcard! Just take a digital photo, write a 2-3 line message and send it to touristliving(at)gmail(dot)com! I'll turn your photo into a postcard and post it on my blog to share your experience of living like a tourist in your own city. (Remember: whether you are living in Duluth or Dubai- I want to hear about the interesting or unique aspects of your city!)
Labels: Baltimore postcards