It is always fun when you begin the weekend without any particular expectations or plans, and it turns out to be not only fun, but action-packed. I will also say with some amount of pride, that I also managed to explore quite a few different places on my D.C. list.

Since my weekend began with a beer float (explanation following), I think I will stick with the theme of “floating” to describe my weekend (some liberties taken)... 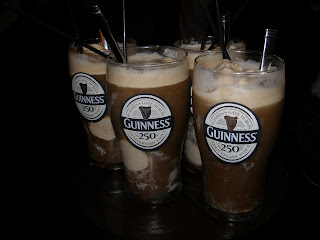 After many attempts to find the right day and willing participants in this outing, on Friday, a group of friends and I finally made our way to AGAINN to have a beer float! I think this idea wouldn’t have appealed to me if it had not been quickly followed by the description of vanilla and stout ice cream scoops atop a Guinness beer. As many of you know, I am a huge fan of Guinness (Tryst’s DuFrein, i.e. Guinness and espresso is another winner). Therefore, I liked the combo of my favorite dessert, ice cream (well… gelato but same family) and my favorite beer. It did live up to my fascination in that it was nothing like anything I have ever tried before, and by the end of the glass, when the ice cream had properly melted and intermingled with the beer, it was even tasty... though opinions varied throughout the group.

Floating on Water- Kayaking on the Potomac 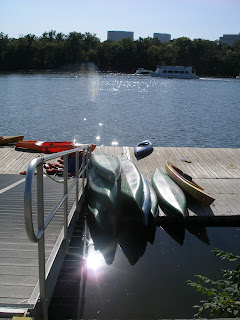 Saturday was a revival of summer and the sunny, breezy, hot day called for being outside. When a friend suggested that we go kayaking, I thought it was exactly what the day needed! So that we did. I have been kayaking exactly once before; so after the workers described the less-than-pleasant status of the Potomac river, I was a little more nervous about a potential capsizing, but looking out on the calm, flat water, I realized that even if my body went into convulsions, I still wouldn't flip. And so we had a combination of floating and paddling on the Potomac while observing the shockingly vast amount of wildlife in the heart of the Nation’s capital. A bald eagle (my first spotting of one in the wild!) circled overhead, while a blue heron curled up on the bank of the river. A crane or crane-like bird emerged from the water with a surprising large fish in its bill before diving back in the water... It was refreshing to emerge from the kayak feeling as if I had left the city for awhile.

Floating in the Heavens- Basilica of the National Shrine 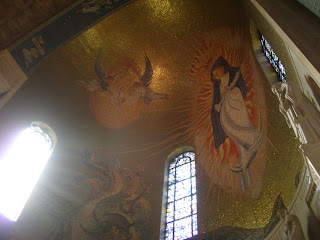 On Sunday, I decided to take on the adventure of getting to the Basilica of the National Shrine of the Immaculate Conception. It was an adventure in the sense that using the metro on weekends is like driving a car with a flat tire. It will get you there eventually, but it will damage your being (and mental state) in the process. So I found a bus to take me the 3 miles due east to the Basilica. Living in Rome, it has become natural for me to visit churches. Of Rome’s 200+ churches, I have probably visited 75% of them. It is hard not to get spoiled by the majesty of San Pietro (Saint Peter’s) or by the elegance of San Paolo fuori le Mure (St. Paul’s outside the walls). However, stepping into this Basilica, I felt it could rival many of even the most specatcular churches in Rome. It is the largest Roman Catholic Church in North America and one of the ten largest churches in the world. Dedicated to Mary, the church is filled with gorgeous blue, golden and orange-tinted mosaics depicting her, Jesus and other biblical figures as they are represented throughout the world. I seriously underestimated the amount to see here, and have thus decided to add “Tour the Basilica” on my aforementioned list.

Floating on a Pond- Lily pads at Meridian Hill Park 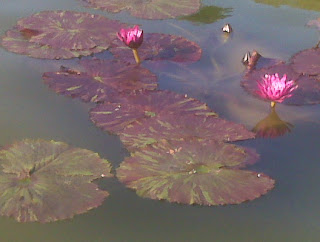 Sunday afternoon was another reminder of summer, and therefore, I was utterly incapable of staying inside. My cabin fever inspired me to visit the nearby park that I had passed many times before, but never explored, the Meridian Hill Park. If you have ever been to Rome and stepped inside Villa Pamphilj, I would equate my reaction of that discovery to this one. Meridian Hill park (on a much smaller scale than Pamphilij) seems just like your average city park on first glance. Benches and trees surrounding an open lawn where people play football or Frisbee. Like Pamphilij, you have to walk a ways past this to get to the heart of the grounds, and there you find cascading fountains that flow along wide steps leading you to the lowest part of the park where there is a small pond-like pool complete with floating lily pads. I kicked myself for not having my camera to capture the brilliant purples and pinks of the lilies, and instead caught a photocopy version on my phone… In such a beautiful setting, it didn't shock me to see a wedding and a separate model photo shoot going on. On my way out of the park, it did shock me, however, to see a man and his pet Iguana on the lawn, talking to onlookers about the virtue of a domesticated, loyal and cuddly reptile.

A mixture of drinking, sport, spirit and outdoors, it was a great way to float into a new week.
Labels: Beer Church kayaking New thing Washington DC