Dancing with Myself... and hundreds of other people

July 31 has been named National Dance Day in the U.S., and to celebrate this day, there was a event on the National Mall co-hosted by Nigel Lythgoe (below), co-creator of "So You Think You Can Dance." 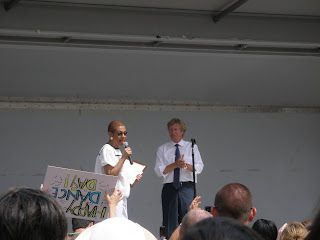 In honor of this, there was also a not-so-secret flash mob choreographed by Tabitha & Napoleon. If you have not heard of a flash mob, it is when, in a crowd of people, about half of them know to break out in dance, song, movement etc at a specific time, while the other ones are left dumbfounded by what is going on around them.

I particularly like that Wikipedia describes a flash mob as "unusual", "pointless" and "brief":  "A flash mob is large group of people who assemble suddenly in a public place, perform an unusual and pointless act for a brief time, then disperse."

Flash mob dances follow the same idea... with a little more direction. I wish I could say ours looked like this one below performed for Oprah...But no, it wasn't quite this way.


(Ours might look a little less organized... it is just because we didn't have the Black Eyed Peas for inspiration).

Point is though: a flash mob is supposed to be inconspicuous. In this respect, our flash mob failed desperately, as it was announced on stage, practiced in a big group next to the crowd and then, as we were sent back to mingle with the people "not in-the-know," we were then asked to raise our hands if we knew the dance...

The element of surprise was definitely lacking. In the end, this "flash mob" was more of a choreographed performance of ordinary people which was filmed to air on "So You Think You Can Dance."

However, for dancers, this is pretty exciting. "So You Think You Can Dance" is the American Idol or Eurovision of the dance world.

This was my first time participating in a flash mob. Though I wrote about an opera flash mob in which I wished I had participated... Dancing I can do. Opera not so much. I can also do pointless and unusual, so perhaps I will find one of those for next time... 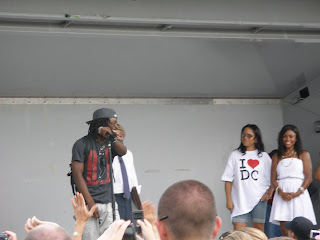 Russell Ferguson, krump dancer & winner of So You Think You Can Dance- Season six 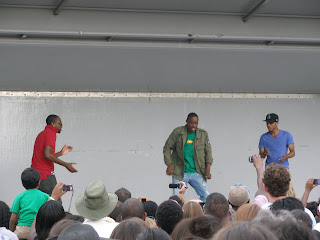 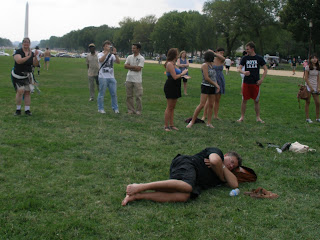 Someone not particularly impressed by Flash mobs and National Dance Day  OR...
someone who ACTUALLY knows the meaning in inconspicuous. Perhaps this was the scene right before jumping into the Flash mob dance. In that case, bravo!
Labels: Dancing Flash flash mob Washington DC