Exploring the "what if" in Belarus 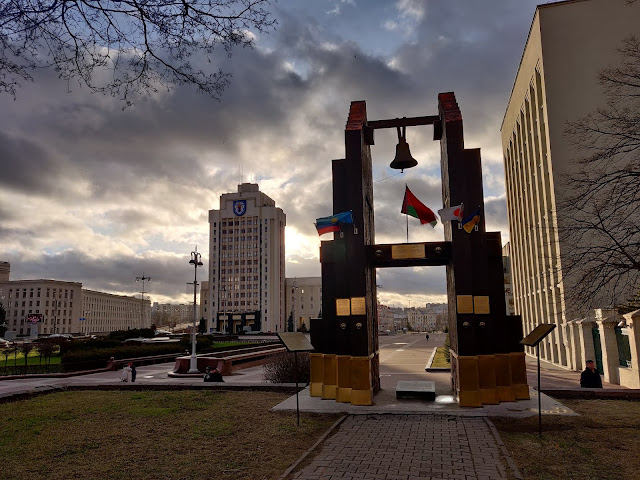 We have been going away for a few years now for my birthday. I won’t deny that part of it is escaping the need to acknowledge my age, but the larger part is that there are few things that I like more than walking around a new city, in a new country, without any plans and just discovering what we discover simply by being there. It is such a liberating sensation for me to just BE elsewhere, to just try life outside of my own reality, to know more of how the world lives on a day-to-day basis. It is the ultimate playground for my imagination: what if I had grown up here? What if I spoke Russian and not English? What if I move here now or if I had moved here when I was 21? What if I move here when I am 81? There are so many possibilities in life and it is astonishing that our reality is the one that played out. So for my 41st, we went to Belarus, for no other reason than this – to go somewhere else, somewhere new, somewhere that could have been. A "what if" trip.

Arriving in Minsk, I was happily proven wrong in all of my ideas and preconceptions. I thought Minsk might be like Kiev, but perhaps more run down. That the buildings would be gray and worn, rectangular and soviet. I thought it might be like some of the suburbs we saw in Tallinn or Vilnius: quaint and quiet, seated under gray skies, brushed by cold winds and (hopefully) dusted with snow. I thought Minsk would be small in size and traditional in style. 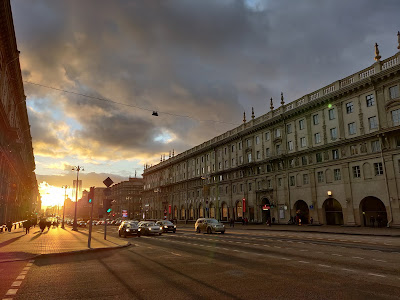 I was off in every respect. Minsk was large, grand, well-manicured and looked after, modern yet classic with all the buildings of the core city center in much better shape than Kiev or in fact many cities in Eastern or Western Europe. Buildings had a golden sheen and spread out for blocks. Streets were 4 lanes wide; squares were massive. Every street looked like it could rival the Champs-Elysée in width and prominence. And there was no snow…  Belarus in January, and there was not even a flurry in the 5 days we were there. I think this is more climate change’s fault than my own flawed conceptions, but my visions were still wrong. 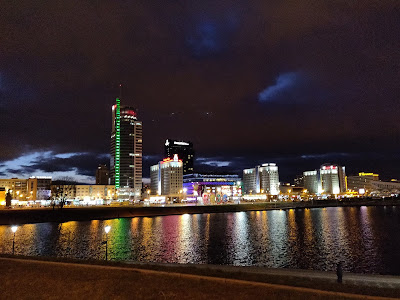 What I love about my birthday trips is the lack of planning. We show up and kind of lead a local life: waking up late, going running, getting groceries, going for coffee. Our great little Airbnb apartment in Minsk was perfectly situated for wandering and for running. In a city that was undercrowded, running was a dream and there were bike lanes, park paths and wide sidewalks, even along the city river. So the runs were long and glorious.

I am now always shocked by cities that are not overpopulated. In Rome, there isn’t anything you can do anymore that doesn’t entail a dozen people within 50 feet of you at all times. In Minsk and Brest, long stretches of sidewalks, road, bike trails and paths were just for us, or for the next runner 1000 feet ahead. People were still out, walking running, biking, using the city facilities but nothing was overrun. Freedom at its best! (Happy birthday to me!) 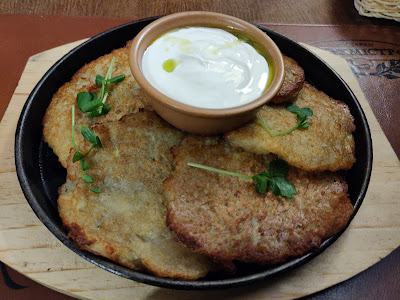 Restaurants had larger menus for drinks than for food. There were pages and pages of beers, vodkas, fermented “juices”, tinctures, other imported wine and alcohol. You could not find a gap in the options.

Food choices on the other hand were not so bountiful especially for a vegetarian. This is never really a surprise or a problem for me, especially in this Eastern part of the continent. I am actually quite easily satisfied with a nice salad or soup, which Belarus did have. The beet root and goat cheese salads were always a go-to food and the mushroom soups were very tasty. But the traditional food, the dumplings (pelmeni) and especially the potato pancakes (draniki) were served much too oily for my taste. I quickly switched back to my staples. Even though there was also white fish on the menu as an option, let’s just say that I wasn’t in my culinary heaven. But this might have been a different story for meat eaters or heavy drinkers. 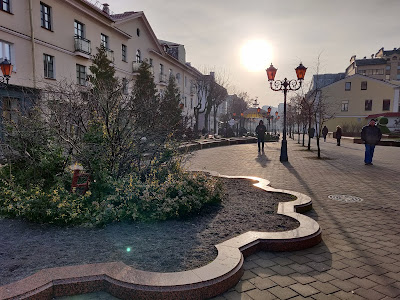 Aside from Minsk we also ventured to another city, Brest, 4 hours from Minsk on the border with Poland. This leads me to another totally misconceived idea: the type of train we would be taking. We thought: old, soviet, last-maintained-40-years-ago chugg-a-roo. Our experience with buying the train ticket only reinforced these notions though as we stared at old analog boards listing train arrivals and departures in Belarusian, with 3 rooms of tellers only distinguishable by signs in Cyrillic. After trying 2 tellers that didn’t speak English, we sat in the large, high-ceiling hall and tried to book online from their English site, but not only were the translations often undecipherable (what is a class train?) we couldn’t pay with our credit card. Why? Who knows.

So back to the tellers we went, to a younger, friendlier looking face who did manage with some basics in English and booked us 2 seats to Brest and back. On what kind of train, in what class, in what arrangement, we had no idea. We just walked away from the teller feeling accomplished with a classic-style ticket, complete with a golden emblem, and we thought, let the adventure begin!

The train to Brest, it turned out, was super modern. Like an airport shuttle train, basic but clean and fast, with spots for suitcases and easy on-off access. For a 4-hour ride, it wasn’t super comfortable, but it certainly didn’t have anything “soviet” about it. It was far more modern than the train to Fiumicino for example. 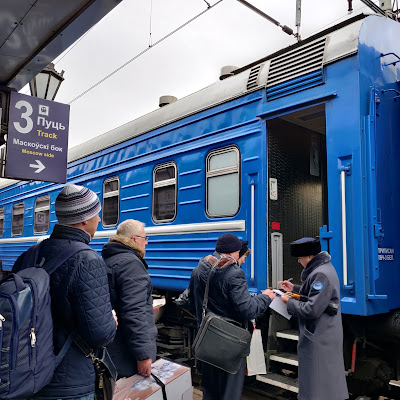 On the way back from Brest to Minsk, however, we were pleased to find a more traditional style train, not exactly Soviet, but one with small alcoves, cots that pulled out from the wall and little tables that would come across your knees. There were ticket-takers in uniforms and fur hats and the train, which ended back in Minsk for us, actually went all the way to St Petersburg (18 hours away in total!) for some others. This was more like it! A REAL train experience. 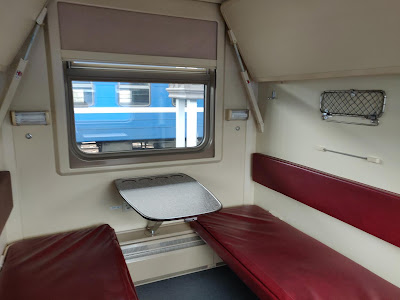 But beyond the train ride, it was also nice to get a sense of the country outside of its capital. Brest was much smaller than Minsk, but not as small as I imagined either. It was quainter, but also had grand, prominent and very historic sites to visit. The Brest fortress, the city’s most well-known tourist attraction, was the site where the Great Patriotic War started when Germany attacked the Soviet Union during World War II using Brest as its entry point. The fortress, still in star-formation and unbelievably large, bears the scars of the heavy battering that it took. Two statues are now on the site as memorials, both in rock and both some of the largest statues I have ever seen anywhere in the world…. One is called Courage and the other Thirst, tributes to the soldiers of the war. 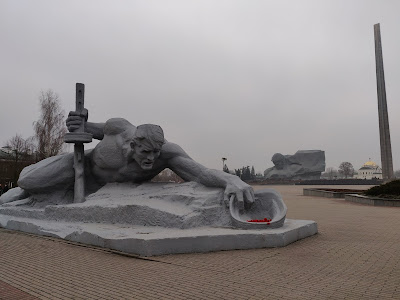 Aside from the military history, Brest is also known for the picturesque pedestrian artery of the city, Sovetskaya Street, and its preserved tradition of manually lighting the streetlamps. Much of this is for show as the street lighter will take pictures with the tourists (I did not opt for this) and the lamps that he lights are the least bright of all the ones on the street, but it is a nice tradition to watch play out. 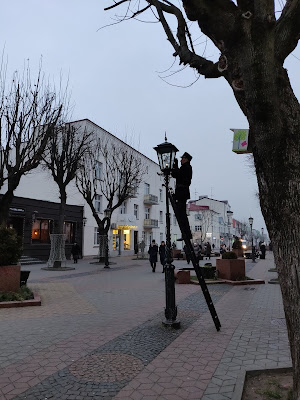 Belarus was also great because we couldn’t communicate. Despite or perhaps because I work in Communications, I am always fascinated and amused by not being about to decipher another language, as you may have noticed from my other posts. Very few people in Belarus spoke English and the ones who did usually couldn’t speak beyond the functional needs of their job.

We relied heavily, very heavily, on Google translate’s photos and conversation functions. But it was nice that no one had a problem with us using this electronic intermediary. We spoke into our phone, trusted that Google would give a reasonable translation, then they would speak back into our phone, and we would see their response. It worked well enough to buy a very good type of vodka, to know whether a certain type of dish contained meat and to know whether the train we were about to board was the correct one. Very handy little tool. But it was great to be somewhere that made you feel like you did need a little help and locals (as well as Google) were happy to give it to us. 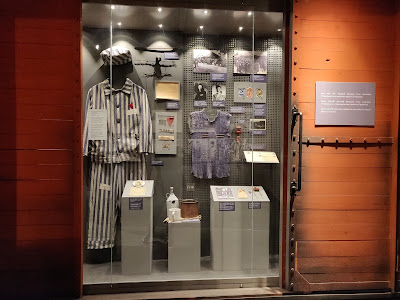 We found plenty of other things to do: a cat museum/café that was a little spooky at moments but well-meaning, taking pictures of the eccentric art (a nose dressed up as a soldier or a single boot statue for example) or tasting sweets that we couldn't pronounce. The Great Patriotic War museum in Minsk was also impressive and definitely a must, even for people like me who are sensitive to these topics and can only handle so much reality at a time. 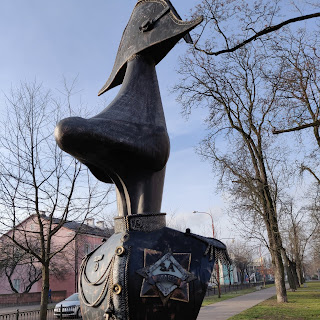 Everything was an experience and one unlike others we had. It was great to be voluntarily displaced, set amidst a new scenario and see how life would play out. And it played out very well with great places to stay, lovely people to meet, tasty drinks (and even food) to have, scenic walks, sites and runs to experience.

I came back a new me, someone who could have been Belarusian in a different life but wasn’t. And someone who now appreciates both that reality and my own a little more.
Labels: Belarus Brest Europe Living like a tourist Minsk Travel Travels