Choosing the unknown: A long weekend in Kiev 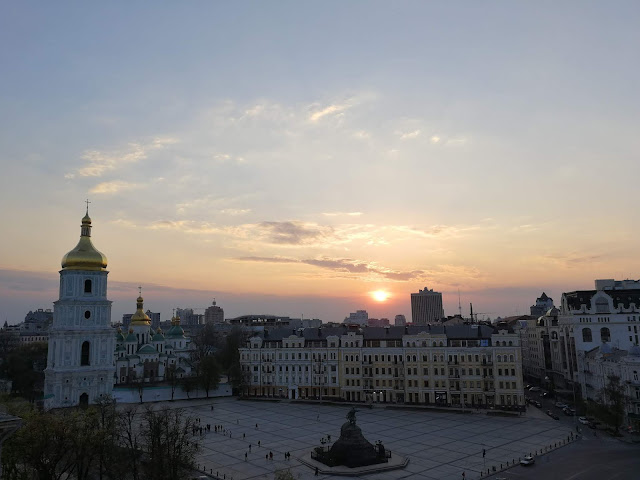 Why do I know this? Because I married a Virgo, or for those who don’t care about horoscopes, a Type A, hyper-organized, live-for-numbers-and-charts kind of guy. That means that we have an excel sheet tracking the countries we have been to. Columns indicate my visits, his visits, our visits, the year he went in, the year I went in, the year we went together, or whether he, I or both would one day like to visit. The excel sheet also, I will have you know, has country flags, links to Wikipedia pages and automated cell counts. Don't get me wrong, this aspect of Virgos fascinates me. I put pins in globes, scratch off countries on maps, or make scrapbook pages of trips, but I am not sure it would have occurred to me to count them... go figure.

But the point of going to Kiev (despite the excel sheet) wasn’t to make it number 78. For me, going to Ukraine was to continue to push the boundaries of what I know and what I don’t. And this thinking usually leads to how I make my choices. 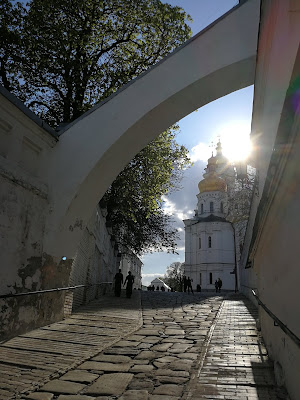 There is of course a comfort and happiness in doing something familiar, in repeating a habit or in knowing what to expect. It is nice to go to a restaurant and order the same dish and not  be disappointed. It is easier to go to your favorite place for gelato or coffee to make sure that your treat lives up to your expectations. It is more comfortable to go someplace where you know the language or the layout of the city, where you don’t need a new SIM card, a currency app, or a cheat sheet on who to tip And I, like everyone else, like to have the comfort option when I need it.

But my personality, even against my own will at times, is much more intrigued by what I don’t know. My favorite flavor of gelato is dark chocolate, but I have willingly tried tomato gelato just to know what it is like (tastes like vomit by the way). On a menu, I will find the strangest type of pizza combination (pear and gorgonzola or cicoria and fontina cheese) just because I haven’t seen it on a menu before and when would I ever get to try it again? I deliberately buy fruits or vegetables that I can’t name at the market. And by now, I know that at least 50% of the time, I don’t like what I have tried. But faced with the same decision next time, I will still make the choice for the unknown because that is part of the fun.


So Kiev was another unknown for me. Despite having  explored other eastern European countries, even former Soviet Bloc countries, there is a lot I don’t know about this region of the world, starting with the alphabet.

Kiev was, for me, an experience in being illiterate. I could stare as long as I wanted at a sign or newspaper and no matter my concentration, I had no idea what is said. What a great and humbling feeling that none of my linguistic knowledge was useful for anything there! It is a position I think everyone should be in every now and then just to remind yourself of how much you don’t and will never know. 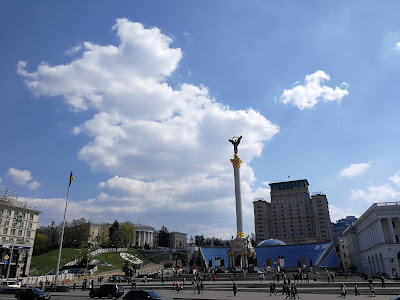 Kiev is a grand city, and that is really the adjective that comes to mind. Grand is the sense of expansive more than in the sense of opulent: large dominanting buildings, wide multi-laned streets, big sprawling sidewalks, wide open piazzas. It is the opposite of Rome where everything seems ristretto.. 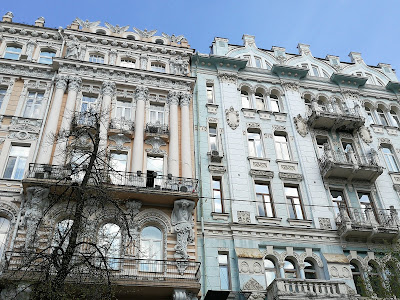 The pace is also fast. People walk briskly. Perhaps not as manic as New York or business-like as London, but people are still going places and use the sidewalks for that. In Rome, the sidewalks seem more like the chosen hangout spot rather than a functional city feature. Standing, ambling, window shopping, smoking, leaning on motorini, sitting at a café, staring at cell phones – people in Rome seem to use sidewalks for everything except walking.

If the pace in Kiev wasn’t obvious to you from the sidewalks, then the metro escalators could tell you a thing or two. Like the gates to let you into the metro, the speed of the escalators is unforgiving. You either jump on to catch a ride or you fall... a long way down. As well as the fastest escalators I have ever seen, they are also some of the tallest. There are billboards on the way down to distract you as you are escorted kilometers into the bellows of Kiev. 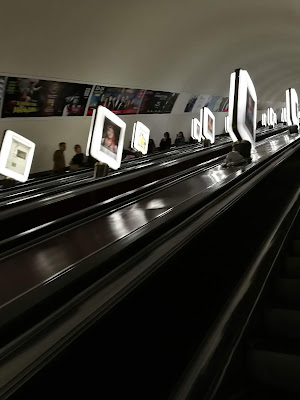 Like most of the transportation in the city, the aesthetics, or perhaps lack thereof, are strong reminders of the Soviet era. The metro stations were usually grayish, off white or brown. Color accents were within the confines of geometry: Blue triangles in one stop, orange rectangles in another. But fast and efficient, the trains came within minutes and took you to where you needed to go without drama or flare.

The grandiose layout of this imperial city mixed with the methodical calculations of communist architecture led to an imposing, awing effect not without a certain feeling of coldness. But that is where the real Kiev came through, by taking these facades and turning them into the unexpected.

Everywhere in the city there were modern coffee bars, themed barber shops, boutiques of super shiny jewelry or delicately polished antiques. Beer, vodka, cherry liquor or other alcohol of choice was also widely available in almost “drive through” manner. You pick your drink at the counter, stand outside at a beer barrel, umbrella or  under the store awning, chat for a couple minutes, smoke if you got ‘em, finish your drink and be on your way to whatever was next on the list. Not a commitment in any way to stay there for all or even a significant part of the night.

Drunk Cherry is one of these spots where the drink of choice is tellingly obvious – cherry liquor filled to the brim… You can ask for half a glass, but they will gently suggest the full, which requires a sip at the bar to be able to  move the glass. Offered to all the costumers, we understood this is as tradition and not just the heavy hand of one particular bartender. There are many drunk cherry locations scattered around town like a Starbucks would be. No Starbucks are needed in this city though as the only thing more prevalent than orthodox churches were coffee stands. 5 or 6 stands all grouped together –They were all lined up awaiting commuters, workers or passer-byers in general. 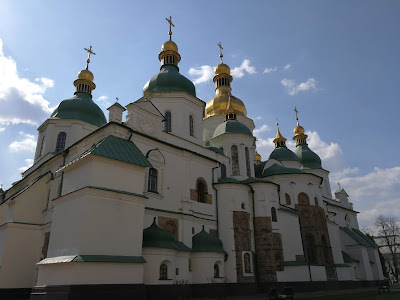 Speaking of Orthodox churches, in Kiev, the golden domes were everywhere. And not just one gold dome per church, 4-8 domes depending on the size and importance of the church. From buttercup yellow to baby blue, the churches were like ornaments on the city, but they didn’t even hint at how elaborate they were on the inside. Patterns, faces, portraits frescoed on every part of the church and framed icons  plated in silver at  every couple steps. A handkerchief often hung next to the portrait  to wipe away the kisses given from the person before. 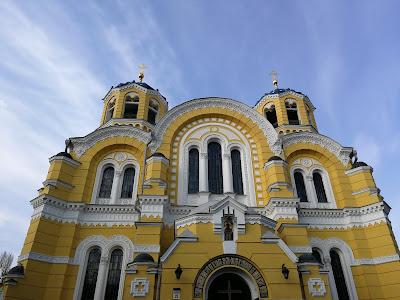 One night we went to the ballet –– We walked up the red carpet into an old-style theater where you traded in your coat for a token until the end of the night. The gold balconies and red-felt interior set the scene for a grand affair, making me wish I worn a gown and pearls instead of dark pants and gray sweater. But even in grand old Kiev, the black-tie days of the theater were over. 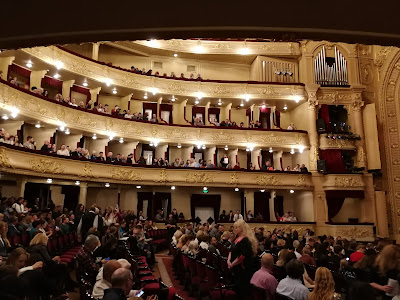 On the important topic of food, it was fabulous even for a vegetarian. Pumpkin soups in bread bowls and dumplings filled with potatoes mushrooms or cabbage. Throughout Kiev though, Georgian food was all the rage and much easier to find than Ukrainian food.Though we gave into the trend for 2 nights, we sought out Ukrainian where we could. 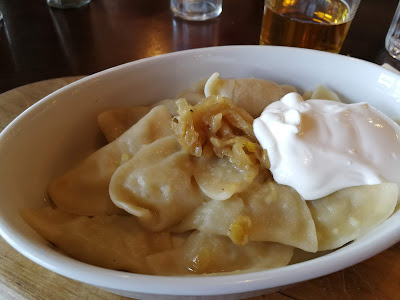 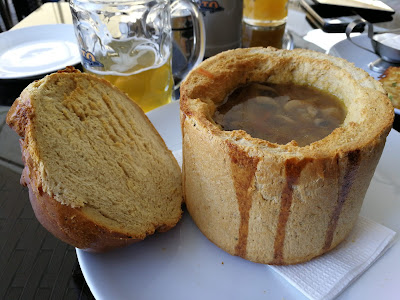 As usual I loved to walk around the grocery store and try to figure out what I was looking at, learning the hard way sometimes. (Kefir and Milk packaging look a lot alike… in fact, it stayed a mystery until I poured it into my coffee…)

Postcards were very hard to find and individually wrapped when you did find a tourist shop selling them. People were very friendly. Ubers were everywhere. Running was not an easy task, with uneven sidewalks, hilly streets, long distances between parks and dirtier air from older diesel cars.

It would have been nice to see other parts of the country, as a capital never tells all about the country it represents, but that would have to be for another time. Long weekends can only hold so much adventure.

Next month we go to Latvia and now I am curious to see what I might or might not recognize there. Of course, I am secretly hoping that I don’t recognize much. The surprises are always more fun.