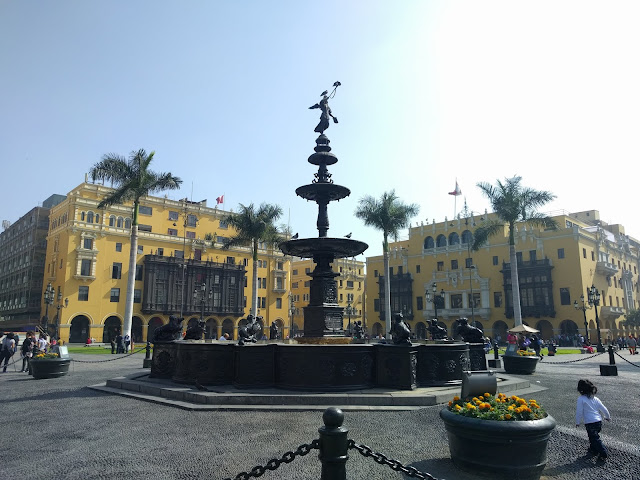 Peru was probably the greatest surprise of our trip. Unlike Chile, I had no inner attraction calling me to visit, and unlike Colombia, I had no preconceived, albeit wrong, judgement detracting me. I had seen the ubiquitous postcards of lush Machu Picchu and grazing lamas just like everyone else and had thought: sure, it would be a nice place to go. However, my rebellious Aquarian nature (I’ll blame it on astrology) always makes me skeptical of fads. Machu Picchu seemed like the latest booming one.

Regardless, we couldn’t go to Peru without going to the Lost City of the Incas, and we made it the last stop in our trip. I should clarify that, although it was nice and symbolic to end our trip on a “high note” with the infamous Cusco 11,000 feet elevation, Machu Picchu was also our last stop because logistically it had to be. This part of the trip was by far, the most convoluted and difficult to plan. One of my next posts will be on just the tricks we wish we had known when planning our Machu Picchu adventure, because it is scarily easy to miss out on much of that experience and we very nearly did.

Aside from Machu Picchu though, Peru has so much to offer, and to contradict one of my earlier statements, even though we didn’t want to miss out on Machu Picchu while in the country, Peru is still worth a trip even without including this wonder of the world. Peru kept us guessing at every turn. There were so many things that we did expect from it and were awed by.

One of the first surprises for us was that Lima is in a desert. You drive just a few miles outside of the city and hit sand dunes. I had no idea. This Middle Eastern looking landscape is a far cry from the lush valleys and green hills you see in those famous Machu Picchu postcards. But coastal, northern and southern Peru are comprised of three deserts, the Sechura, the Coastal and Atacama deserts, that stretch all the way down to Chile. In fact, according to one site I read, Lima is the second largest desert capital city after Cairo.

Another surprise is that Peru really lived up to everything people told us about it. Machu Picchu really was magical. And the food really was extraordinary. Throughout our travels, as we explained our itinerary which ended with Peru, people, without fail, would say, “Oh, you are going to eat so well in Peru!” The first, second and third time, we smiled and said, “Ah yes, ceviche. We love ceviche.” But the enthusiasm of friends and strangers alike on Peru’s gastronomy had us very curious indeed by the time we got to Lima.

Of course, as with any hype, we expected to be let down, but our first meal had us hollering Amen to all the chants that Peruvian food is heaven. Restaurant Cebicheria Rosita had the best ceviche we ever tasted, and it wasn't just the ceviche. We tried Arroz con mariscos a la Limeña (seafood rice), Chicharron de calamar (deep fried calamari), Leche de tigre (citrus marinade) … all amazing. It was probably the best meal we had in any of our Central or South American trips.

I also discovered another dish called chupe, a type of seafood stew, that was one of the most diverse sets of ingredients I ever had: shrimp, evaporated milk, one sunny side up egg, a local type of mint, rice, corn, cheese, potatoes, green peas, tomato paste, a lot of other things and a bunch of spices. It was a completely surprising taste that reminded me of a mix of Thai, Caribbean and Latin food all at once. If I didn’t think it would take me 30 hours to make and come out tasting like play-dough, I would make this dish at least once a week.

Peru also provided us with the chance to see a real oasis, Huacachina, and to climb a sand dune to watch the sunset. It offered us the opportunity to go off-roading in a natural reserve where the desert literally stopped dead and plunged into the Pacific Ocean.

It gave us the possibility to spend the night in a trailer park; its status as not-quite a hotel, an eco-park they called it, allowed for it to be the only accommodation on the reserve. Hundreds of flamingos (again not what I would expect), hundreds of thousands of pelicans, and other colorful birds flew around the coast line or small lakes that had somehow formed within the desert. 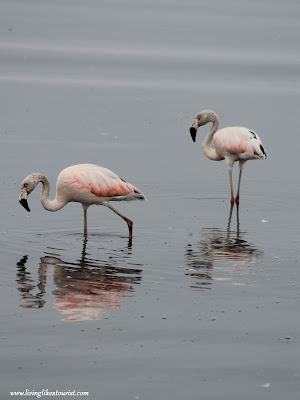 We got to go to a small fishing village, Pucasana, hidden among sand dunes, where we were definitely the only tourists. We found a winery that was like stepping out of the desert and through a worm hole to another part of the world where the hills are rolling, the land is lush, and the soil is fertile. After driving for hours on highways with only sand in sight, it was like discovering life on Mars. Peru is fascinating like that.

As promised, my next post will talk more on Cusco and Machu Picchu, the two being true highlights of our trip, but I was happy that we had also scheduled in an extra week before even getting to Cusco. Though Lima had its charms, (the aforementioned food, its very grand and beautiful main square i.e Plaza Mayor, the Kennedy park which is a refuge for stray cats, Miraflores’s uppity elegance along the coast and Barranco’s mellow hippy-ness a little further south), 2-3 days was ample time there and we quickly reorganized ourselves to see more than just the capital. This extra week, which many tourists may not factor in, let us discover so much more about Peru, and its truly surprising nature. We never knew what to expect and it always turned out to be a good surprise.