Home away from home: Buenos Aires

When we left Rome on December 1, it really felt like we left home. This shouldn’t have really been surprising to me, considering how much time I have spent living there and how four years ago I finally declared Rome my home. Yet, somehow, it was surprising. It was even more surprising to realize how many people we were saying goodbye to, not just friends and colleagues, but to neighbors we got to know, to our dry cleaner up the street, to our Porter, to my aesthetician, to the priests who married us in Spello, and all the other people that we saw regularly in our life in Rome that we wouldn’t see after December. It felt like a final goodbye this time, even though it was my fourth goodbye to Rome. Perhaps it would not be a real goodbye, like the three times before were not, but it felt different, scarier, this time and there was a large part of me that feared that this one was for real.

Five months later we landed in Buenos Aires and even in the airport, I felt like I was in Rome again, for all the good and bad reasons. There were about 5 ATMs in the airport, none of which worked, the rationale: it was Sunday. Yes, we could have been in Italy. The resemblances just kept popping up throughout our entire stay: The cashier's resentment at getting a large bill. The mega long lines and peculiarly slow check-out at grocery stores. The 4 dollar bottles of wine that were better than the North American 30 dollar ones. The protests ever couple days. The blocks and blocks of yummy pizza and gelato restaurants. The coffee culture.

The similarities ranged from small things like the pits in the olives on pizza and the bidets in the hotels and apartments to big things like being able to sit outdoors in cafes during the mild winters and receipts that were wrong or change that was missing. To me, even the way people speak Spanish is reminiscent of Italian; Argentinian Spanish has the same beautiful, sing-songy inflections and dramatic tones as Italian.

Of course, there is an obvious reason for all of these similarities.  A huge percentage of Argentina's population has Italian heritage (up to 62% according to some sources). Most of these immigrants came over about 150 years ago, in the late 19th - early 20th century, around the same time that they went to New York. To a much greater extent than the Big Apple though, Buenos Aires really felt like it has carried on the culture and feel of the mother country.

Don’t get me wrong, Buenos Aires was very un-Italian in many ways too: broader, grander boulevards like those of Paris or Madrid, a much farther-reaching, organized and cheaper metro, avocados on the streets, tango clubs and radio stations, bold, shiny Latin-looking buses, more legitimate parking options and churches filled on Sundays, to name a few. Argentina very much has its own culture and national identity, one that they are proud of, and should be. 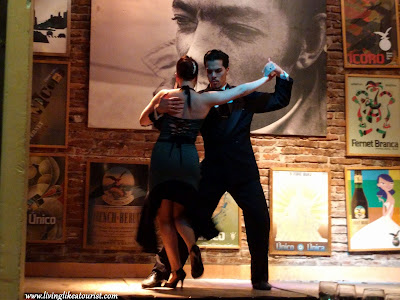 We didn't stay in Argentina long enough to get into the real subtleties of the culture, but we did have time to take in the local life. We had rented an apartment for those 12 days in Buenos Aires, so at least for that short time, it felt like we were properly living there. We went to the grocery store every day and to mass at the corner of our street. We used the metro to get everywhere and went running in the nearby parks. We did laundry in the building and then at the nearby laundromat when the laundry machine broke (… also like Italy). We cooked meals with the local ingredients and had coffee in the neighborhood cafes.

Yes, in many ways it felt like being home, but in others it felt far from it and far from friends. I had visited Buenos Aires once before in 2004 and I had loved it. It was the one other city aside from Rome where I could see myself living. Now I know why. Back then, I don't think I had picked up on all the similarities. This visit was a little bittersweet for me; I still loved it now, but it felt a little like dating a boy that reminds you of your ex. It might ease the pain, but it is not a great reason for being together. Buenos Aires reminded me of my ex and I wasn’t sure how I felt about it this quickly after the break up. Perhaps it was too soon.