A new start by getting to the finish line

I ran a half marathon this past weekend. The full thing. Without getting hurt. Without even feeling that tired. I expected none of this.

Running always reminds me of some of life's rules:


These were certainly my lesson from Sunday. I had signed up for the half marathon in December. Then in my diligent, regimented fashion, I had printed my training material. I made sure I had the right shoes, the right socks, the gear for cold weather, the iPod play list... all the things I had painstakingly discovered as necessary from the first couple times I tried to train for a marathon, all of which ended up in injuries that knocked me out of training groups and races. I learned the hard way what my body could and could not do, which of the thousand recommendations out there worked for me, and it was only three years after my first attempt that I was finally able to build up to a marathon, the Rome marathon in 2007.

So since my days of injuries, I have been pragmatic and cautious. I follow training schedules properly and stick to methods that are, for me, tried and true. At the beginning of January, I was on target for the 26 February RomaOstia half marathon, running every other day the appropriate number of miles and sessions.

And then life kicked in. I ran 8 miles, but I had left my "proper socks” in Italy. Wearing the wrong socks got me a half-softball sized blood blister that lasted 1 week, consequently cancelling all runs. In the meantime, I left for Rome and promptly struggled with jet lag. Then, for the first time in literally 20 some years, Rome got snow. Schools were cancelled. Work was disrupted. Roads were a mess and parks were closed. Amidst this, I had a surprise trip to ice-covered Budapest.

By the time I was back, that Rome had defrosted and that my feet were healed, it was one week before the half marathon. I gave up the idea of doing it. After all, I hadn't followed the rules. I hadn't trained. I hadn't mentally prepared. I didn't buy energy gels. I didn't check the weather to know what to wear. I didn't have sweat-wicking t-shirt. I decided, "I shouldn't run." I made other plans. I said, if anything, I’ll walk part of it.

But then I went to the runner’s expo, and the call was too strong. I didn't care if I couldn't finish it. I had to try. I had made it a resolution. I needed it. 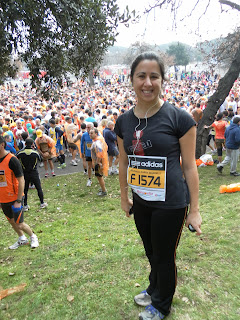 The morning of the run I hadn't slept well. I hadn't eaten enough. I hadn't found a t-shirt that wouldn't chafe, I hadn't warmed up properly, but I was high on the energy of the run, on the support of my love and on this opportunity that I had wanted to do for years. And I thought,  “I'll just listen to myself, stop when I need to and run at least 16 km” (what the training schedule would say that I was up to).

So February 26th, I ran. And while running, I people watched. I enjoyed the sun and the feeling of spring. I sang along to my iPod. I didn't focus on the hunger or crowd. And the minutes and hours slipped away. Before I knew it I was at km 16 and still going strong. 17. 18. 19.  All of a sudden, I had 2 kilometers left to go and I was astonished. I wasn't hurting. I wasn't tired. I wasn't going to stop. "But you did everything wrong! How is this possible?", my head screamed. "Shut up!", my body yelled back. And I began to sprint. I sprinted the last 1.5 kms and finished the race in less time than I had given myself had I trained properly.

And it felt like with every kilometer that I ran away from Rome and toward Ostia I was leaving behind another hang up. The past with all its "mistakes" (that perhaps weren't mistakes after all), where nonetheless getting farther and farther behind. At the finish line, I was at a new start. 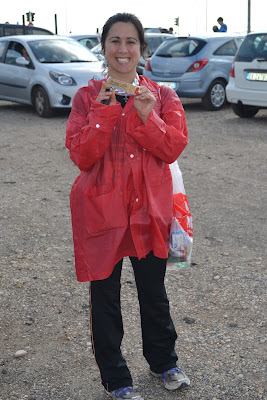 I had underestimated myself. I had underestimated that even if I hadn't trained according to my perfectionist standards, I had been in training for years. I had been building up endurance for years. And though, this particular time I didn't take inventory of what I needed, I knew what I needed. I had learned those lessons from past experiences. I knew myself better than I thought and all those things came together.