A frozen February weekend in Budapest

Europe has frozen over. It then of course makes sense that this is the year I decided to leave all my hard-core gear back in North America where they get "real" winters. Shame on me for underestimating Mother Nature. But despite the wet socks, frozen toes, and layers of sweaters that are making me bulkier but not warmer, I do enjoy seeing Rome and other European cities under the snow.

I went from cold to colder, snowy to snowier this past weekend when we flew from Rome to Budapest. As a surprise birthday present, this was a trip that I had no prior knowledge of, and I had even less knowledge of exactly how cold it could get there (-21 degrees Celsius). Yes, real winter. So my silly assumptions came back to frostbite me in the a--. 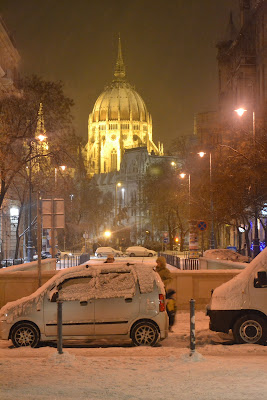 But enough of the grumbling, and let's talk about Budapest. It is an amazing city. The grandeur and class of Vienna with the folk tradition and pride of, for example, Romania: it is a fabulous mix. And on par with (or perhaps even better) than Paris or Rome, the city glows at night. A trip down the Danube in the evening will leave you awestruck.


I have a new camera that I promptly put to use and subjected to the elements. (It survived the snow and cold). And I had a mighty fine time trying to capture just how GRAND Budapest was. In French, the word means large; in English, it means stately or elegantly large, if you will. Perhaps not Holden's favorite word, but certainly one fitting for Budapest. The palaces were GRAND, the bridges were GRAND, Andrassy avenue was GRAND. It was easy to feel regal there.

Food-wise, the humorous advice I got before leaving was, "Try not to starve." As a vegetarian going to Hungary, land of gulasch, this wasn't a completely facetious comment. I, of course, did not partake in the famous Hungarian tradition of gulasch or the Mangalica pig roast. But I had three things in Budapest that I could have substituted for every meal and still been happy:


The greatest thing was that you could get these things in almost every restaurant. (Don't worry. I did eat more than that, and all of it, particularly the sauces were great).

The coffee houses (Central kavehaz to be exact) were definitely a highlight, especially my sugar-infused coffee: one layer of honey, one layer of coffee, one layer of whipped cream. This more than made up for my "french toast" that, in Hungary, I found out means deep fried bread served with sour cream.

The thermal baths, of which there are 130 in Hungary, were exactly the remedy for frozen-stiff limbs although my body almost waged a full-fledged battle not to go back outdoors afterwards.


But my favorite part of all was the Christmas market. Ok, it wasn't a Christmas market. However, if I ripped off the wall the calendar page reading February, I could have pretended to be in an authentic Christmas market. The temperature was right (below freezing with snow flurries in the air). The setting was perfect (a GRAND open square in a northern European city). The sights were perfect (little wooden hut-type stalls selling food and crafts). And the smell was perfect (gluhwein and, sad to say, meat. Not my choice smell, but undeniably Christmas market-esque).

I had been desperate to go to a Christmas market this year and had looked longingly at flights to Berlin, Brussels, Copenhagen and Stockholm only to be overwhelmed by new major changes (job, apartments, cities) and the days went by without a confirmed plane ticket.

But here it was! My Christmas market in February. So the timing might not always be right, but life does indeed tend to deliver what you really want.

Thanks Budapest. I'll have to visit you again when you begin to thaw.
Labels: Budapest Travel