I was a dork in high school. I know this. And even if I didn't, I could have looked up my character description in an urban dictionary and have seen my high school-self reflected in the terms dork, nerd or even geek. Straight As, shy, bookworm, with uncontrollable hair that was only worsened by Debbie Gibson and the sense of style through the 80s and 90s. This was me for an embarrassing amount of years.
This past car trip up to Canada, I got a glimpse of where some of my nerdiness came from. My parents, sister and I fell back into "family trip mode," a phenomenon unknown for many years now. Yet, we quickly reverted back to our old time-passing car games. Not "punch buggy" or "I spy," but "Name the 50 U.S. States" (a memory game that is a lot harder than even American history buffs might realize) and "Name the State Capitals" (a game that American history buffs would be good at, but that we "regular" folk are not).
Many state capitals are obscure, town-like spots that sometimes have no other claim to fame than its status as the capital of something: Frankfort, Kentucky; Dover, Delaware; Lansing, Michigan. Even states like New York and Pennsylvania can throw you for a loop (Albany and Harrisburg respectively).
So on that topic, the other day I went to Maryland's lesser-known city and state capital, Annapolis: a charming and lazy little town on the Chesapeake Bay in a colonial style that reminds you that Maryland was of the original tranche of states, one of the original 13 colonies. 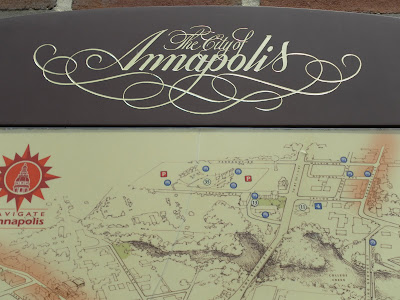 Annapolis is adorable with its red brick establishments, seafood restaurants and two streets of shops. Of course, those familiar with U.S. Naval Academy know Annapolis for this reason. And it is not hard to spot navy men in their ironed whites walking the streets of the city, usually improving the view. I did not follow my instinct to photograph this particular sight, but I did photograph some of Annapolis' other ones.
Though there doesn't appear to be a clear rationale or common approach for how capitals were chosen, land donations or proximity to populated areas seem to be two reasonable answers given. Regardless, I think the tourism industry should be grateful. It draws people (more or less successfully) out of the bigger cities to some of the other charming and/or more characteristic ones. I'll admit though that in my numerous trips to Florida, Orlando and Disney World have always trumped Tallahassee.
And for those of you who are now curious, here is a resource to practice memorizing the U.S. state capitals.
Labels: Maryland