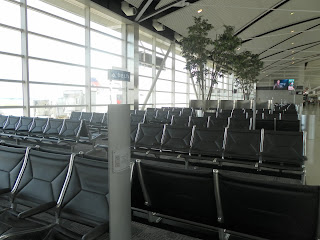 It has occurred to me over my increasing number of travels that time in an airport actually constitutes a large portion of a person’s travel. This is particularly evident to me today as I am in Detroit for seven hours awaiting my next flight.

As is often the case, I don't have quite the amount of time to go out of the airport and into the city. Yet, I have realized that airports can be seen as a cities condensed, packaged and presented in the form of a gift shop.  Granted, the result can be trite, stereotypical, moneymaking reproductions and not real culture. BUT, it is actually fun to scope out nuggets of culture and city pride that is buried under and amid the masses of capitalism-inspired crap. So it is almost a missed opportunity not to “visit” Detroit through its airport.

If you look beyond the ridiculous price tags, the concept behind most of these gifts do point to something authentic for which the city is either proud or known or both. For instance, sports teams. You can always tell how big a particular sport is in a city by the number of stores and paraphernalia dedicated to that one sport. Some cities are “baseball” cities, some are “american football” cities or others, hockey cities. Internationally, you see this on a smaller scale but you can still tell which sport cities follow and whether or not their football (soccer) team is 1) a winning team (jerseys of recent world cup wins), 2) a popular team (absence of any home team jerseys at all).


An airport also allows you to see what products are made locally. In grocery stores or throughout the city, it might be hard to decipher what is locally made. Marketing in an airport helps you know which chocolate is actually produced in say, Pennsylvania, rather than Switzerland.
I like the idea of viewing the airport as a type of travel guide: what places to visit are often photographs on the walls or exhibits borrowed from a great local museum. What meals to eat are either packaged as souvenirs in the travel marts or sometimes show up on the menus of airport restaurants (e.g. “Michigan’s own…”). What to do can be answered by the souvenirs for sports teams, popular museums, local TV stations to visit etc. Atlanta’s airport for example has corresponding shops that can point you to a visit in Coke World or the CNN building.
By those accounts, Detroit seems to be equally proud of the red wings (hockey), tigers (baseball) and lions (football). The Henry Ford store exhibits Detroit's reputation and history as the center of America's automobile industry.  Other stores display motown paraphernalia, pointing you to Detroit's tradition of soul music and the popular Motown Museum. And there are locally grown products from state farms, everything from jam preserves to chocolate, reminding you that agriculture (especially apples) is an important part of Michigan's economy.

It might not be an authentic visit, but I do feel like I know Detroit a little better and should I find myself here again, I would have a better idea how to visit this city.