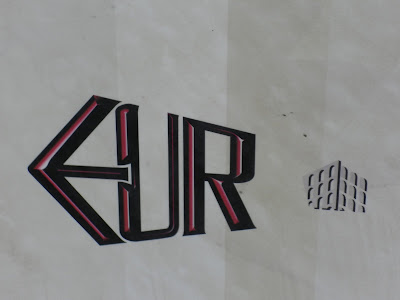 I felt like doing something different today, and it doesn't get much more different from Rome than to go to EUR. EUR stands for Esposizione Universale Roma and it was meant to be the site of Benito Mussolini's 1942 World's Fair, celebrating 20 years of Fascism. Yet, because of World War II, the fair never happened.
Rome is to EUR as Curvy is to Straight, Chaos is to Order, Irreverent is to Regulated.
Walking around EUR with sidewalks that are used for walking and not for motorini, parking, dog poop, restaurant terraces and everything else Roman sidewalks are used for, it really feels as if you have left the capital if not Italy itself. The nice green parks, the clean streets and almost graffiti-free buildings, EUR would  feel like a nice escape, except for the feeling that someone could be standing over your shoulder or bugging your cellphone to ensure that this was your reaction. You can tell that EUR is forced-upon order and not the normal way of things. Oppression; that is a good word for EUR.
I am not an expert on fascism, but EUR is its embodiment. I am sure that an authority on the Fascist-era can point to a million different symbols, urban planning theories and building inscriptions that exemplify Mussolini's view of society. However, even if you have no knowledge of this type of political philosophy, you can get a strong sense of what EUR, the fascist Rome, was meant to portray: 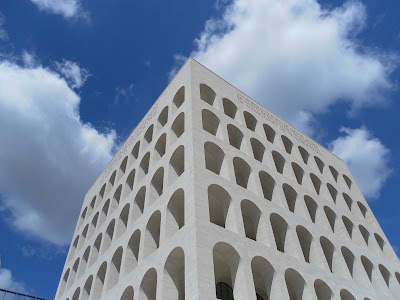 Below is one of the only example of graffiti I saw in EUR, and in a prominent location, just down the street from the Palazzo della Civilta del lavoro (the real name of the Square Colosseum). I got the impression that this piece of graffiti could have resulted in capital punishment had Mussolini been around...
Even the massive Basilica of San Pietro e Paolo that sits mightily on the horizon of Rome is pretty eerie. It was closed when I went to visit, unlike most of the churches in Rome, and from its pristine, organized and angular exterior, it gave off the same austere, seriousness as the rest of EUR. The reliefs of the two saints' gruesome martyrdom, Paul's beheading and Peter's upside-down crucifixion, weren't exactly a welcome mat either.
Yes, EUR is something different. Perhaps like going to Ikea after spending all day at a flea market, it can be a welcome change. And it is definitely worth putting on the hat of a historian and exploring this "city within a city." As for me, after half a day, I was happy to head back into the chaos.
Labels: EUR Rome