Food and Wine all' Abruzzese 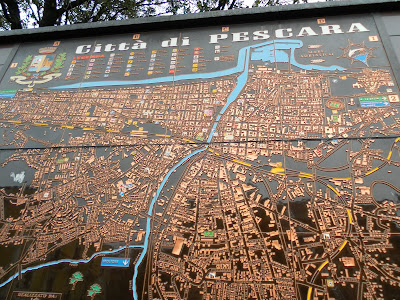 Pescara
Before diving into how food and wine made up for the pouring rain and unseasonable cold in Italy, a short note about Pescara. This big, seaside city, destroyed in the WWII with what’s left looking fascist or modern, had little to offer non-beach-goers. So on a damp, gloomy day in April, as you might imagine, it was less than inspiring. Sadly, the one traditional-looking restaurant we found was the same, less than inspiring, an even bigger disappointment to me as I had yet to have a proper Italian meal in the week I had been back. To make up for it, we went in search of something pacifying: wine!


Tollo
I also reprimand Lonely Planet for not making mention of Tollo or the wines of this region… Tollo could rival any Tuscan town set amid vast stretches of vineyards in every direction. With the sunshine, this would have been a heavenly site. In the torrential rain, it was still breathtaking but heartbreaking to know that we would not see the view in its full potential. 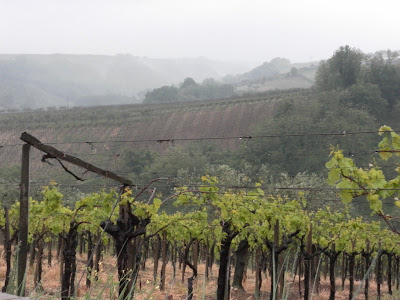 Montepulciano d’Abruzzo is one of my favorite wines and upon learning that this is actually a type of grape and not just a reference to the city in Tuscany called Montepucliano (one of my favorite Italian cities), I took a liking to the Abruzzo region, just out of thanksgiving for this magnificent wine.
Days before, I had indiscriminately bought a bottle of Montepulciano d’Abruzzo at the grocery store and liked it immediately. Coincidentally, this specific wine turned up on most of the menus we glanced at in the towns we visited and realized the vineyard must be nearby. So we tracked down a bottle at a local grocery store, found the address for Cantina Tollo on its label and traced down the web site from a handy little blackberry. 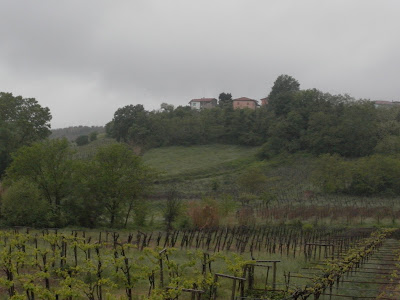 The web site did not give us much detail except for a general area and an address, so we took a chance and went to Tollo, the city where it’s from, despite the pouring rain. However, despite knowing nothing about Tollo, despite most Italian vineyards not having a public showroom and despite it being past 1700h on a Saturday, we made it, they had one and it was open.
Once inside, we had very generous tastings of a couple different wines including Cagiolo and I bought two bottles without hesitation. Between this and the wine we had already purchased, we had 1 bottle short of 2 cases of wine in the car. Jack pot!
Pacentro
The other gem of the trip was Pacentro. We had no intention of going there. In fact, we would not have gone there had we stuck with our first instinct of backtracking to the highway. Instead, we decided to use the smaller, theoretically more direct, but certainly not faster roads. These roads redefined windy and after an hour of exceptionally undulating roads, my stomach was in knots, my face was green and I was ready for some club soda and time out of the car. Pacentro was the first town we hit and its medieval, castle-like towers convinced us right away that it was worth a visit. 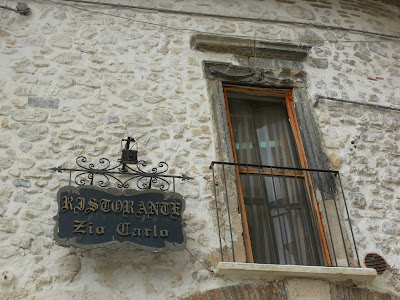 On a holiday Sunday, our first two attempts at getting lunch were in vain; both restaurants were completely reserved. We were told about a third under the arch in the main piazza, but as we walked in and noticed that only one table in the two rooms of the restaurant was occupied, we were not convinced. Yet, we didn’t know if we had any other options, so we accepted the offer to come in. Despite sitting alone in the back room of the restaurant, we were slowly won over by the cook and her husband serving us off the menu in their head rather than one handed to us. We asked for the antipasto and promptly had a spread of food covering every available spot on the table.

I had mentioned to them that I am a vegetarian and, seemingly to make up the for the fact that I must be starving, they brought us three plates full of cheese, two baskets of bread, two plates of funghi in olio, sundried tomatoes, a sauerkraut-type marinade of vegetables, all in addition to the traditional antipasto of sliced prosciutto, salami and other various meats. 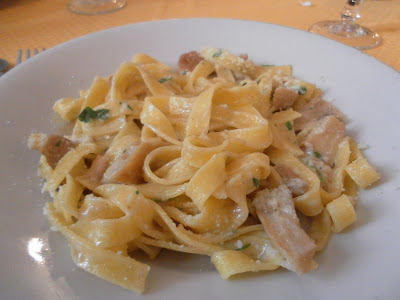 My stomach’s previous motion sickness was soon lulled by the savory vegetables and the creamy, salty cheeses. The vino rosso also did wonders and by the time the primi piatti were supposed to arrive we stared at the table incredulous at how much food we had already eaten. Yet, we didn’t turn away the tagliatelle ai funghi, and good thing we didn’t. The homemade pasta with the mushrooms that melted on my tongue reminded me of why Italy is praised for its food. With the pasta digesting, however, we did ask them to cut off the elaborate meal there without bringing a secondo, which would have been meat anyway. Yet, there was still a caffe and a limoncello fatto a casa (homemade) to top off the meal.

For whatever the reason that this restaurant was empty while the two others were booked to capacity, it certainly wasn’t a reflection on the quality of the food. Pacentro was a great idea and a lovely end to un weekend abruzzese.
Labels: Abruzzo Italy