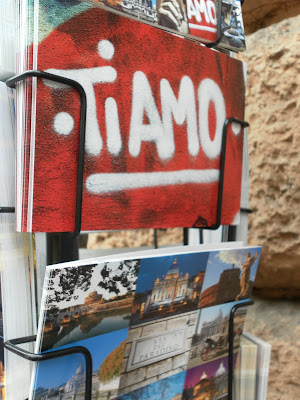 I was nervous, like a girl going to see her ex-boyfriend. The trepidation that this probably isn't a good idea filled every empty space within me.

It had been two years. I was over it. I had moved on, made new friends, redefined my life. But then the opportunity presented itself, and it was too difficult to say no, because there is a part of you, isn't there, that is always curious? And then the real question: am I really over it or did I move on because it was no longer an option?

But the pain wasn't a distant memory; it was hiding behind the new layers of recollections I was creating day by day. And that lurking pain made itself more and more known as I got closer and closer to Rome. Getting off the plane was like walking those last steps into a restaurant before spying your rendez-vous. The trembling of your fingers, the quivering of your voice, you know you are scared, but it is too late. And you are afraid to admit that maybe you are even a little excited.

And then you see him, and you know why you were scared. You're still in love. The emotions rush back like a tidal wave and you know there is nothing to do but let them wash over you. You made this decision. You are here. There is no where to go but forward now, dealing with the consequence as they may come.

I have missed you. And from the subtle ways that she shows it, I know Rome has missed me too. She had put on her best outfit: the sun was brightly shining, perfectly painted light, blue skies, a warm and breezy day. And she was on her best behavior: The trains and buses came on time, the machines all worked, the people all friendlier than I ever remembered. Her perfume of caffe and pane caldo wafting through the air... Yes, she had missed me. I could tell.

It wouldn't stay like this of course. The excitement, the shiny facade, the aura of perfection would all fade away within a few short days, but for now, we enjoyed each other. It was the right decision to be together again.
Labels: Italy Rome