When being a tourist just isn’t enough 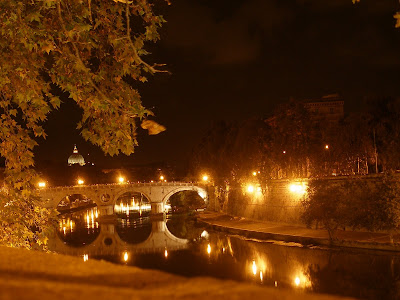 For the last two entries I have written about being a tourist in Chicago and Dublin: fun, fascinating cities that I have loved visiting and would certainly go back to.

But there is one city for me where being a tourist just isn’t enough: Rome.

Why? Well, that’s the question.

Perhaps Shakespeare’s age old question of “What’s in a name” has had more of a play in my life than I can logically explain. Mardelli. “You’re Italian, no?” “No,” I must always explain. “It was changed from Mardini, which is originally Armenian.” But even Mardini sounds Italian…

Born in the U.S., last name from an Armenian city which is in present day Turkey, grandparents from Syria, father from Egypt, relatives still in Lebanon and Montreal, and all my mother’s side from Quebec practically since the founding of the colony at which point I can only assume they were from France… I have ties to practically every other country except for Italy.

To add to the identity crisis: I have a convincing Italian façade: dark hair, olive skin- I have been told I look Napolitana or Siciliana. I speak the language, which is university- learned not native. And of course, there is the name.

So “What’s in a name?” … Perhaps the seed for an obsession.

If the curse is in the name, then it would explain why the whole Mardelli household is plagued. My dad, his sister, his brother, my own sister, and my cousin all speak varying degrees of Italian, learned in addition to their native French, Arabic and/or English. For what reason? Just because.

My cat’s name is Matteo. My parents dubbed their house “Mardell’amore.” The most popular song at my cousin’s wedding was “Italiano vero.” Why? Inexplicable.

My obsession, however, is the worst. Every time I leave Rome, I feel compelled to return to it. I have lived there three times in my life and visited many other times, and with each departure I feel an immense loss. I almost instantly feel homesick.

To those cynics out there: let me clarify. It is not the stereotypical, cardboard, Hollywood painting of La Bella Italia that I miss. I don’t think all Italian men are intrinsically gorgeous. I don’t think “O Sole Mio” plays from the open windows atop cobblestoned streets, drifting past drying clothes on a line. I know that you cannot turn your back on the Fontana di Trevi and be the only tourist there to throw a coin over your shoulder. I have far from idealized this city.

I have even left Rome disgusted. I have sometimes boarded the plane thankful that I would be leaving Rome’s deafeningly loud, frustratingly defaced, shockingly dirty and unabashedly chaotic ways.

I am by no means blind to Rome’s faults. I know that a large percentage of Romans allow their dogs to use sidewalks as toilets, so that summer often brings with it the strong stench of pee or trash from overflowing dumpsters that have not been collected without good reason. I remember that many older, Roman women will veritably act as if you do not exist, allowing them to run straight into you on the streets, cut in front of you in store lines or push past you on the way into a bus or train…

After living in Rome for a total of almost 4 years, these things have by no means gone unnoticed. I can list Rome’s faults honestly and complain about them fervently.

In fact, with each of my departures I genuinely wonder if perhaps NOW I have gotten my fill: that I have had enough of the discourtesy, that I have seen all that I wanted, that I visited everything I intended, that I amply photographed all that I hoped never to forget, and that this was the stay that would satisfy the craving and let me return to my “real” country without this incessant pang. Nope.

I always miss “home.” And like anyone loyal to their home, I can still defend Rome endlessly, see its magic through the mess, and miss it desperately despite its flaws. These problems don’t drive me away (at least not forever) as you would think they would drive an outsider away. I have a dedication to this city that I do not have with any other…

But why should Rome feel like my home? I have no logical liens with this city: no ancestry, no childhood memories, no living relatives, or long lost first love.

Can I just boil it down to mixed wires? Or is it that Rome offers a perfect combination of letting me be that perpetual tourist while still allowing me to feel at home?

Exploring the illusive, sometimes misconceived, questionably unattainable, notion of home is, in part, where the idea of this blog came from: “For those of us who can’t quite define home.”

So my travels help me examine this concept of home:

These questions are increasingly poignant to me, and they are significant at this moment in my blog because, as part of my trip to Ireland, I, like clockwork, felt compelled to return to Rome. And so I did.
Labels: Italy Rome Travel