The Trip to the End of the Rainbow 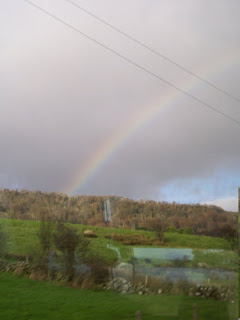 Some of you caught that in my last blog entry I mentioned being in Ireland. Yes, I did mean Ireland the country. And yes, it was random… part of that hopping around on a bum of springs that I also mentioned.

I decided to test the beautiful concept of reward air miles to see whether or not they are solely a marketing apparition. It turns out that, with enough finagling, they’re real! I had accumulated many in my various jaunts across the ocean, and with my currently flexible schedule, I thought why not use this blank slot in my time to insert a visit to a new country.

I also had another incentive; my sister is studying for her Master’s degree in Dublin, or more correctly, Blackrock, a little city-suburb just south of Dublin.

I had never been to Ireland, but liked the idea of a country represented by a fictional character such as a leprechaun. I would just as readily make it a point to visit a country symbolized by, let’s say, a unicorn. (What country would that be do you think?)

I had no specific touristic goals for my trip to Ireland except to try a real, Irish Guinness, and I didn’t think I would need any researching or planning to do that. And indeed, no; you do not need any maps or plans or list of instructions to find a pint of Guinness. In fact, aside from its pint form being at any of the 1,000 pubs in Dublin , Guinness can also be found in chocolates, stews, steak sauces, mustard… you name it. The list is quite exhaustive.

I can happily report that I more than sufficiently fulfilled my goal. I even went to the source of the matter, the Guinness Storehouse, where I not only learned how one makes Guinness, but how one stores, markets, pours and tastes Guinness. On that note, yes; it does taste different than what we have here. I had heard this urban legend and was suspicious of it. However, knowing the difference that local water makes on espresso and how nothing we can do here in the U.S. can make an espresso taste like that of Italy, I suspected that the same could be true of a Guinness. Unlike the Italian espresso, however, the Irish Guinness did not ruin me for all other Guinnesses. 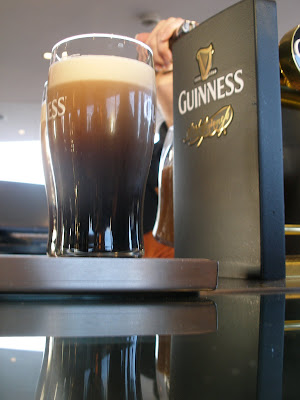 Aside from imbibing Guinness, I spent my time in Dublin re-learning some of my high school English knowledge by revisiting the poetry of W.B. Yeats. I think that the theme of unrequited love, his Maud Gonne and the sad tale of Yeats’s one-sided affection, was particularly touching to me as a high school student. Could you not see teenagers, chin-deep in emotion and angst, taking an affinity for a poem like the one below?

Were you but lying cold and dead,
And lights were paling out of the West,
You would come hither, and bend your head,
And I would lay my head on your breast;
And you would murmur tender words,
Forgiving me, because you were dead:
Nor would you rise and hasten away,
Though you have the will of wild birds,
But know your hair was bound and wound
About the stars and moon and sun:
O would, beloved, that you lay
Under the dock-leaves in the ground,
While lights were paling one by one.*

I also visited two of Dublin’s major Cathedrals, St. Patrick’s Cathedral and Christ Church Cathedral, and was a little puzzled by the fact that neither one was Roman Catholic, the religious majority in the Republic of Ireland. In fact, both cathedrals are Anglican (Church of Ireland)… which made me doubt my historical knowledge of the country, but, as always, things are more complicated than they seem. 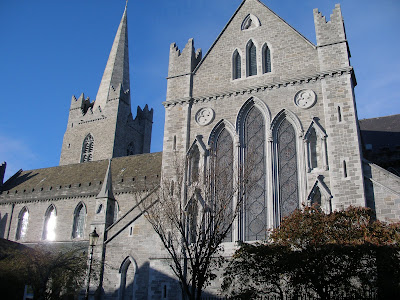 From what I gather, both were Roman Catholic at one time, Christ Church having been consecrated as the Cathedral of Dublin by the Vatican. St. Patrick’s having been Roman Catholic before the English Reformation. After this movement, both became Anglican, making Dublin one of the only cities with two Cathedrals of the same denomination.

So in sum, though the majority of Dubliners are Roman Catholic, their city does not have a Roman Catholic Cathedral. It has a pro-Cathedral (or acting Cathedral) called Saint Mary’s. Meanwhile, the city has the unprecedented circumstance of having two Anglican Cathedrals, a conundrum they finally handled by making one, St. Patrick’s, the national cathedral, while Christ Church the cathedral of Dublin.

All in all, Dublin was a fascinating city. It wasn’t difficult to see what inspired the legend of the rainbows and leprechauns. It rained almost every day I was there, and being a fairly temperamental climate of rain intermittent by minutes or hours of sunshine, I also saw 4 rainbows in my time there. Sadly, I did not have time to chase the pot of gold, but you always have to leave something for the next trip.