I knew I wanted to get away for my birthday. Where didn't matter. But I didn't want to stay put.

I have not felt at home or at peace since I have gotten back to Rome. There are a whole series of reasons why; the biggest are that my kitty died and that the apartment that we moved into has had an endless stream of ridiculous problems. This combined with a lot of smaller issues, like my old-reliable computer crashing, getting backed into in our new car and being investigated by the Quebec tax commission, has just made it feel like, despite my best attempts, I haven’t been able to make Rome feel like home again.

And probably because of the stress of it all, I keep getting sick and being sick makes everything worse because you can’t run around and ignore your problems. You have to sit still and face them, which means that I have been forced to stay inside, in this seemingly cursed apartment, living in the absence of Matteo and staring at my broken computer screen.

So of course, I booked a flight out of retribution. The cheapest flight to a place I hadn’t been was to Oslo, so that was the one I booked. It was self-inflicted banishment. If I was without a home, "home-less" if you will, I wanted to act that way.

Oslo was an escape for an unquiet and peace-less mind. And, in retrospect, what a funny place I chose to go to: Norway, the land of the peace prize. One of my first impressions was how quiet everything was: the Norwegian Air flight, Gardermoen airport, the train into town. It seemed a land where stillness was everywhere: silent zones on trains, hushed talking in restaurants, kids everywhere but rarely audible, wide open sidewalks and low population. The winter grayness and snow made the world feel even more tamed.

And in turn, this stillness and quiet tamed my mind too. I let my anxiety and restlessness condense into droplets and freeze in the Norwegian cold, a mild cold, that was just enough to crystallize those drops into snow. My thoughts became snowflakes that fell on the ground of Oslo. And looking at the white world it created, a blank slate, I felt relieved. 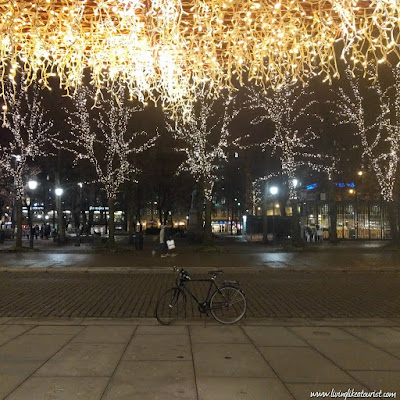 Oslo was beautiful, serene, grand and inviting. We could walk everywhere on boulevards that seemed made for royalty and really were. New cafes and restaurants spotted the city amidst its old elegance. The theatres, palace, parliament and museums were a distinct placeholder for an elegant past, but modernity was very much alive. The new Opera House and construction cranes reflected Oslo’s march forward.

It is true that everything is expensive, very expensive in fact, but it is a good test in moderation, making you question whether you really needed that extra glass of wine or that dessert.

People always spoke Norwegian first, but switched to English without disdain or hesitation. We were not treated as anything special, not foreigners to gawk or scoff at, not as anyone outside of the ordinary. No one asked where we were from; it didn't matter. Everyone was treated like a local: equal, normal. We were just there and that was what mattered.

Maybe that idea of equality, that no one is great no one is terrible, is what lead the Nobel peace prize museum to be subdued. Housing the stories of some of the most amazing people who ever lived, I was let down to see that each incredible person had only one small screen with about a paragraph of text assigned to him, her or it. No story. No extravagance. No drama.

There was something peaceful about that as well, but knowing that outside those museum walls, there was drama everywhere, sad, depressing, infuriating drama, never more personified than in the newest world leader, I was hoping to hear the stories of some of the people who stood out in history as the real lights of the world. I felt like the museum fell short of portraying that; it didn’t give due credit to these amazing people and stories. Maybe I was particularly disappointed because I needed to hear inspiring stories more than most of the museum’s visitors.

Oslo is also known for its coffee and it did live up to that though. We are tough critics coming from Italy, but we tried 4 places and all were well above average. Stockfleths, a chain, but one of the oldest coffee houses in Oslo, was my favorite. We never once felt compelled out of desperation to visit the Starbucks that were there.

We bought nothing but we were amused by the variety of trolls on sale and marveled at the beautiful wool of Dale of Norway. The train ran perfectly. The grocery stores were organised. All the machines we used worked. The bathrooms were clean. It was a nice break from Italy’s "charm".

I knew this fix was temporary, that getting on the plane back to Rome, nothing would be solved: no cat, no real home, no instant solutions, but I could pick up my marker again and return to that white slate. A lot was still out of my control, but I felt calmer. In some small way, I was more ready to rebuild a home even if I am still grieving my lost ones. I can wrap those happy memories around my grief and make them into decorations for the new place.

I am not on track to win a Nobel peace prize, but out of this trip, I did win some peace.
Labels: Birthday Europe Norway Oslo Travel Travels