We all have a tendency to want to make the unfamiliar familiar and we usually do that through comparisons. The Copan ruins are like Paris. Dubai is like Las Vegas. That music teacher looks like Prince. Unfamiliar meat tastes like chicken...

We all have our own comparison points. Everyone told me that Panama City is like Miami, but because I have never been to Miami, that meant nothing to me and seeing the 20 some sky scrapers on the Panamanian sky line took me completely by surprise.

For me, driving on the seaside highway past Panama City’s elaborate downtown felt more like Chicago. Perhaps you have never been to Chicago and so that comparison means nothing to you. Suffice it to say though that super tall, architecturally interesting buildings right alongside the waterfront, Chicago’s or Panama City’s, is always an impressive sight. 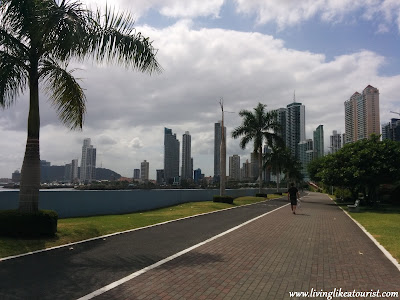 Panama was interesting because it was so familiar in some ways, so different in others. It uses the American dollar as its currency (with the addition of their own coins). English is much more common. More than any other country I have been to in Central America, Panamanians did not hesitate to switch to English when faced with my fledgling Spanish. Malls take up both a large part of the real estate and social activities. And finally, Panama City has a Costco. Need I say more.

It was at once comforting and at once disappointing to see such a modern “USA”- style society. Like in the US, you drive everywhere which means there is usually a ton of traffic. The shopping, restaurants, cafes etc. are almost all indoor, usually in the aforementioned malls. The cost of food and other products was also comparable to the US; no 25 cent avocados like you have in Guatemala.

Of course, the USA has had a huge part in Panamanian history – for better or for worse. From its independence from Colombia to the building of the Canal, the US has always been highly “involved” let’s say… but that is a much larger topic. So I will leave it at that.

It is also very evident that Panama is gearing up to be an economic hot spot, the likes of Dubai or Bangkok. It has improved its highways (thanks to newly installed tolls), put in a metro system, is expanding its airport and is really promoting real estate investments particularly in the downtown, Casco Viejo area. Apparently, they painted over some of the more unseemly graffiti and a ton of brochures list the various benefits, such as automatic permanent residency, that you get if you invest 300,000 USD or more in the country. It is fascinating to see a city so driven in its mission.

Panama has also capitalized on the Canal as a tourist sight and has built a completely new visitor center at Miraflores to accommodate the increasing number of people flocking to the locks.

There is something about the Panama Canal that is completely fascinating while at the exact same time, utterly boring. You stand around watching water fill a surprisingly narrow space that will eventually lift up a massive ship in extreme slow motion. Then the ship sails, or more like inches, away. It is like watching golf; there is so little action.

However, somehow, it is captivating. And everyone stares at it like the finale of the World Cup, snapping pictures, commenting to other stander-byers, waiting in awe for the locks to close and the ship to rise. It must be that somehow, intrinsically you feel that this was a huge feat of engineering. Ships should not be able to essentially go over land to get from one ocean to another, and the Panama Canal’s engineers made it happen. Pretty cool even for someone who does not, in the slightest, understand the mechanics of it. 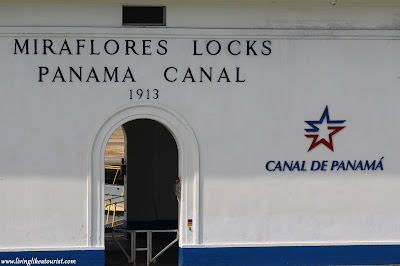 It is also apparently the only time and place on the seas where the captain ever gives up control of his/her ship. That is requirement for the Canal, but a massive No-No anywhere else. As a control freak, I get how big a deal this is. What? You want me to hand over control of MY ship. Uh-uh. Not gonna happen. But if you don’t want to go around the entire South American continent, then you might have to reconsider this stance. You give up power, let another capable person take over your responsibility, let him/her navigate the tricky, narrow parts and then you get control back later, after a lot of waiting (it takes 18 hours+ to get through the 3 sets of locks that make up this canal).

This very much sounds like another important life lesson that I have been resisting lately. Sometimes giving up the navigation of your own ship is the quickest way to where you want to go. Even if the power gremlin in you doesn’t like this and resents the fact that you are just supposed to stand around idle and watch your crew take selfies. You have to suck it up and say: yes, right now my job, is not to have one. It is to listen to direction and step in when I am called. It is a weird thing to have understood from Panama, but I appreciated the reminder.

Seeing more than just its capital would have told me a lot more about Panama, but our week there was a nice chance to reconnect with friends, an interesting reminder about some facets of American society and a good example of how different countries in the same region can be. It was also a time to remember to quell the power gremlin and let someone else do their job.