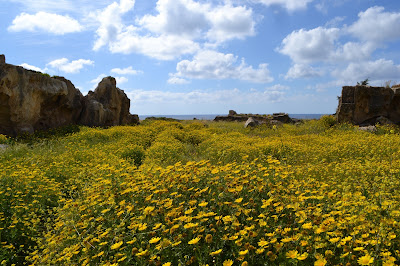 Cyprus is a place of myths. Paphos in particular is known as the birthplace of Aphrodite, the goddess of love. She was said to be born out of the sea foam created when Cronus cut off his father's genitals and threw them into the sea. From this fairly grotesque, but altogether standard Greek myth, comes the other tales of Aphrodite, the goddess of beauty, love, laughter, pleasure and maybe not shockingly seeing her origins, procreation. Aphrodite is forced to marry Hades, the god of the Underworld. Adonis, one of her famous lovers, has given his name to many of the modern day ones and her child is probably the best known of the Greek gods, the winged creature Eros, better known as Cupid. Cyprus is at the heart of a thicket of beloved and infamous tales. I had a couple myths about Cyprus as well before going there. One was its location.


Myth 1: Cyprus is located off the southeast corner of Greece

You see, my head does not hold a very accurate map of the world. The tectonic plates in my mind move much more quickly than they do in real life and countries either seem much further or much closer that they actually are. When we decided to go to Cyprus, I thought it was essentially an island off the southeast corner of Greece. In reality, Cyprus is southeast of Turkey and as much off of the coast of Syria or Lebanon than of Turkey. I only realized this on the flight when I started wondering why it was taking 3.5 hours. Greece is only about 2 hours from Rome. Then I saw. Geographically, we were going more to the Middle East than to Europe. Who knew?! (Answer: Anyone with a map.)

Myth 2: as A Ryan air destination, Paphos would be overrun with tourists.

We went a little off season so it was a bit hard to know if parts of Paphos were so lifeless because they had not yet been resurrected for summer or because the turn in the economy had visible consequences on this particular spot. However, in what should have been the nightlife district, buildings didn't seem boarded up for the off season, they seemed boarded up for good. An entire block of clubs, concert spots and restaurants stood with lights out, broken windows and sealed doors. Again perhaps customary for April, but it was definitely weird to experience this part of Paphos as such a ghost town when direct Ryan air flights inject plane loads of tourists right into this city.

Myth 3: Food in touristy spots will be terrible.

In the evening we went to the harbor area for dinner. Beautiful as it was, these rows of restaurants with tables out over the water and a gorgeous view of the sea all screamed tourist trap. Each had a host standing outside promptly escorting any tourist walking by into their restaurant with promises of great food, low prices AND a better experience than the restaurant directly adjacent it. At a glance, there was no way to tell the difference between them so we let ourselves be escorted by what we felt was the most genuine of the herders. Despite the menu being only in English, the tables being full of foreigners and the aforementioned alluring view, the food was amazing. Too often in Italy, when the view and location are amazing, the owners soon realize that the food need not be. In Cyprus, this didn’t seem to be the case. Over the 4 days, we went to this area multiple times for meals and we were happy each time. I would not try this to dispel this myth in Rome, but in Paphos it seemed to work. 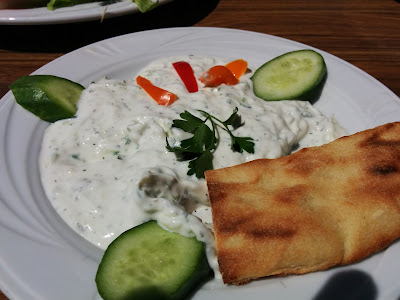 Honestly, this is one of the biggest myths. One of my take-aways from Cyprus is the kindness of these islanders. Everyone seemed genuinely interested, helpful, thoughtful or concerned. I never felt a burden or annoying. I never felt bothersome or in the way. Cypriots seemed to sincerely welcome you there. They didn't try to reel you in too much; they didn't try to ignore you too much. They mainly just treated you like anyone else, local or foreign the same. It was a refreshing feeling.

Myth 5: Cyprus is only worth a visit for its beaches.

It was very warm, perhaps even warm enough for a swim, but we did not step foot on a beach. It was April after all, and the Italians in us said, forget it. But we saw some die-hard, mainly British, beach-goers touring the city in their trunks and bikinis, undisturbed by the occasional gusts of wind that made you remember that winter just ended. Ignoring the beach section of our guidebook, easily-entertained me still had the picturesque sea views, the fascinating old buildings, the yogurt and chick pea-based food and of course the local cats to keep me amused. We also toured the church where Saint Paul was lashed 40 times for bringing Christianity to Paphos, the old floor mosaics and roman ruins, better preserved than anything you see in Rome and the tomb of the kings which appeared as a veritable movie set of Indiana Jones.


Cyprus also kept my husband entertained. But he, on the hand, was most fascinated by the discord. Nicosia is the last split capital city in the world. Half is owned by Turkish Cypriots the other half by Greek ones. There is a border control right in the heart of the city. They use different currencies, different languages and advertise different products. Just across the border, the northern and southern part of the city feel 300 miles away from one another rather than 300 steps. Unlike former years, this border is not as tough and relations not as tense as they have been historically but there was enough hint of contention to keep him interested. Boys.


Regardless of your intentions for visiting Cyprus, it is definitely worth having wheels to explore the island. If we had had more time, we would have made more use of our rental car. The highways are well maintained, the streets empty and other interesting cities are a day trip away: Limassol (1 hour away) and aforementioned Nicosia (2 hours away).

Forget the myths; the reality of Cyprus is just as fabulous.

The kindness of the people and what seemed like genuine contentment were my two lasting impressions of Cyprus. Cypriots seemed to enjoy their island: its alfresco restaurants, its oregano-spiced food and grilled meats, its omnipresent sea views, even its attractiveness to foreigners. You could feel in them an understated pride. And they have reason for it, Cyprus is pretty fantastic.