Living like married tourists: Honeymooning in Sri Lanka & the Maldives

So apologies. I still plan to reminisce about the cultural findings I obtained as a foreign bride in Italy, but that’s for another time. Let’s fast forward a minute to the more recent and less contentious adventure: the honeymoon!

Honeymoons are the best invention ever. We left behind the chaos of 9 months to escape to Sri Lanka and the Maldives. There was no specific logic or rationale to these choices: I vetoed Antarctica. He vetoed Capetown. We both said it would be novel for us to try out a do-nothing beach holiday. Yet, we simultaneously agreed that we could probably only stand it for a couple days. (I said 4 days, he said 2 so we chose 3). So we settled on a direct flight from Rome to Colombo, Sri Lanka where we could spend 9 days of touring ancient ruins and temples, ambling through old colonial cities and encountering wildlife and then 3 days in the Maldives where we would be forced to do nothing because the resort is really the only thing on that particular island.

For knowing very little about our choice of Sri Lanka, it all of a sudden seemed like every person we talked to had been there and endorsed it: The food is flavorful. The landscape is lush. The ancient cities are a marvel, the beaches a paradise. We got so many recommendations that we packed our nine days with 6 different cities and 5 different hotels. We had an excel sheet itinerary were we had to slot in nap or relax. Classic type A travelers.


However, worn-out-post-wedding-me was already starting to get anxious that our honeymoon would be run the same draconian way as our wedding planning. Day 1 in congested Colombo and Day 2 of 5 hours on the road behind cows, tuk-tuks, stray dogs and bold humans didn't help. I became a little dubious about our choice. Luckily from Day 3 onward, we were in the heart of Sri Lankan countryside and it was marvelous.

You’d think we would be sick of ruins, living in Rome and all, but the ruins of Polonnaruwa were so vastly different that it didn’t feel like we were just experiencing the eastern version of the Roman forum. Aside from fascinating temples and statues, I was equally enthralled by what felt like was untouched nature everywhere. Living in a city where cats are the main wildlife, coming to Sri Lanka was like taking down the bars at a zoo. 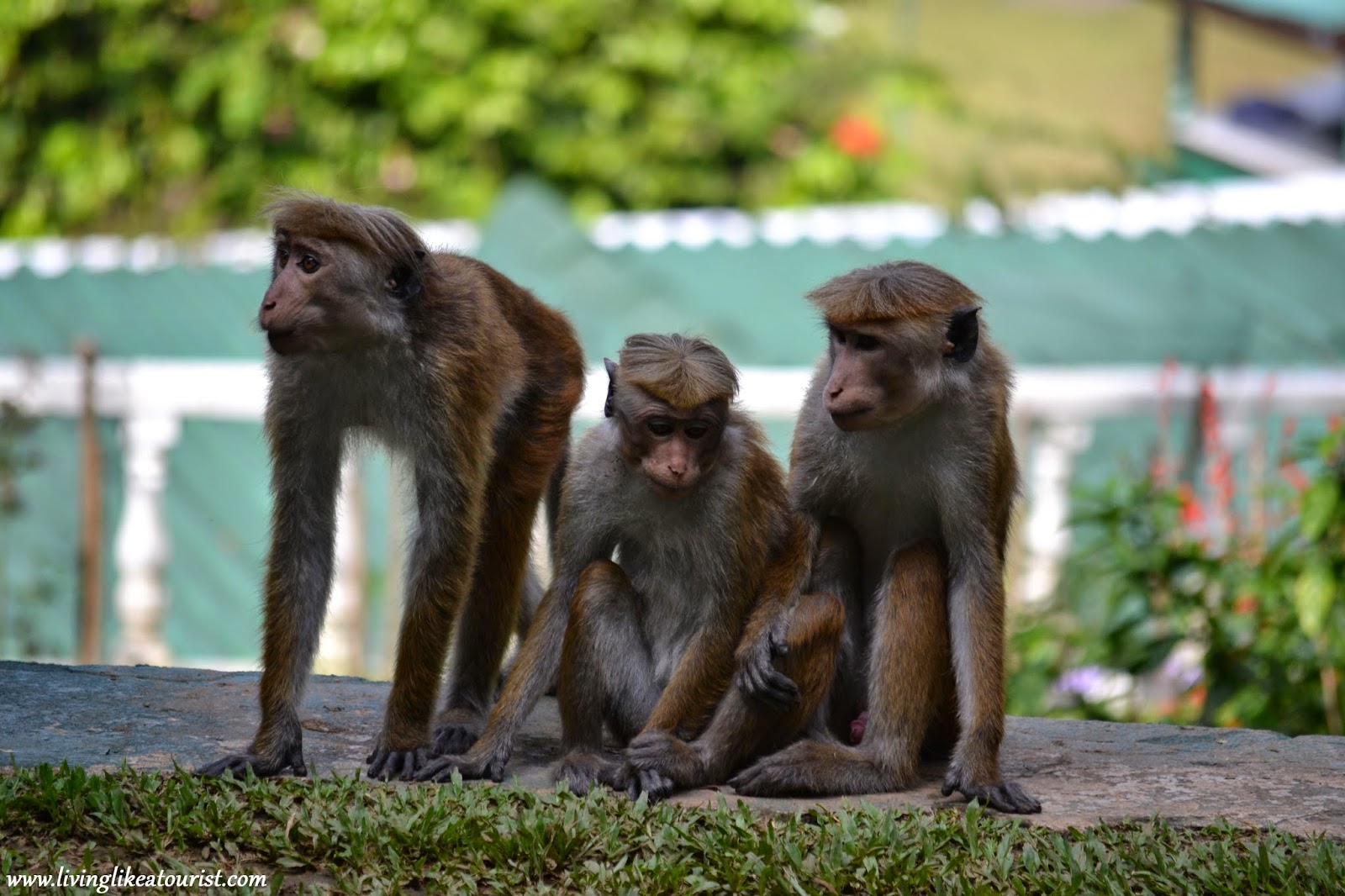 Monkeys are to Sri Lanka what cats are to Rome and I photographed them as much as I do Rome's felines. In addition, hawks, lizards, monitors, brightly colored birds and bugs, and butterflies of every color kept me entertained like a kid in a candy shop… or well, a kid in a zoo.

We saw elephants too of course. We were told that there are still many wild elephants; however, we only saw them in captivity. I was weary of going to visit them having heard that some of these orphanages or rescue centers are just ploys to get tourist money and that the elephants are no better treated than those in a circus. Reading about the bigger ones, we decided to go to the Millennium Elephant Foundation. It is definitely a place that happily accepts money from tourists (and a large amount of it- entrance is 35 dollars each). However, it seemed fairly legitimate that they did in fact care for maltreated or injured elephants. After hearing their story from a knowledgeable guide, I relaxed a little and realized that the elephants did seem to enjoy their baths given to them by the mahouts, i.e. elephant handlers, or by tourists, like my husband for example (see below). 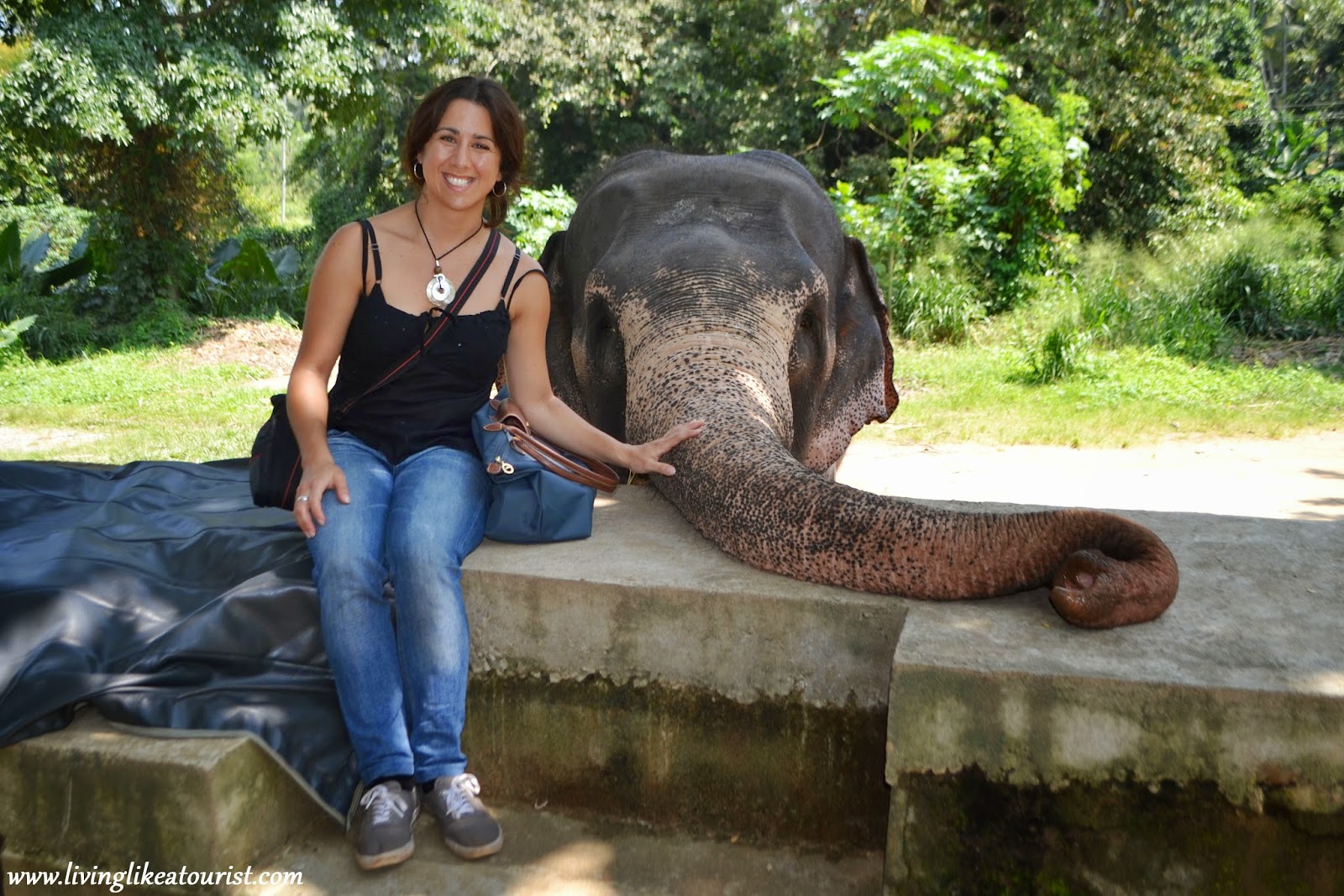 Another highlight was our climb up Sigiriya rock fortress. We were too skeptical and perhaps too stubborn to ever hire a local guide, so we based our limited knowledge of any of these sites on a lonely planet book I had gotten as a gift two days before departing.

The little we learned about Sigiriya was that though there is a widespread legend that it was built as a palace for a prince who killed his father the king and fled to this site, nature's perfect fortress. There is no actual evidence that this was a palace. They know it was a monastery at one point, but despite the feeling of grandeur inspired by the gigantic lion paws guarding the staircase, the extensive complex of buildings, the natural moat and the alluring frescoes of bare-breasted women (supposedly the king’s mistresses), there is no concrete evidence that any of this was royalty-related. So the legend lives on and each believes what she will.

We then went to Kandy, the second largest but a very undersold city it seems to me, with its beautiful serene lake encircled by promenade along its perimeter. Granted there didn’t seem much to see aside from the gorgeous and extensive Botanical gardens and the Temple of the Tooth, which is p.s. the holiest Buddhist site in Sri Lanka. However, it seemed like Kandy could be nice setting for a longer stay in Sri Lanka.

We stopped at one of the many advertised spice gardens and tea plantations along our drive to the south. Both are wonderfully organized tourist traps, with the informative part of the tour falling very secondary to the sales pitch of what you could buy from their very own shops.

Galle, an old dutch colonial city by the water in the southern tip of Sri Lanka, was our last stop. Aside from the Old Dutch hospital which they recently revived with new businesses and with a sense of community, I was not so impressed with this rundown city that seemed to now only house expensive hotels, chain souvenir shops and very few locals, but a walk along the cities walls was worth it for the view of the ocean and the impressively clear water.

We also spent 3 hours at Mirissa beach, renting chairs at the obliging Paradise beach club hotel. The Indian Ocean is not calm, especially compared to the lazy and placid Mediterranean sea. I was taken back to 18 years of summers along the Atlantic ocean where waves were just as big and tides just as powerful. I used to dive into the biggest waves with total pleasure. Now I watched them from a beach chair. Was this me getting old or me turning Italian? Our beach time was just about to start though so I didn’t feel too bad about my whimpiness.

We flew to the Maldives the day after and landed in one of the world’s most fragile, fabulous and frivolous places. Paradise exploited could be the subtitle for the Maldives, but don't get me wrong, it is undoubtedly and unmistakably PARADISE. It sets the standard for clear turquoise water and white snowy sand. You can’t be in the Maldives and not, at one moment in your time there, think I will quit my job and live here. How can you not want to be surrounded by that much natural beauty all of the time? Of course, then there is the reality that the cost you are paying per night and per meal is enough to eat up 1-3 months of salary and you realize that beauty is fleeting and not cheap. 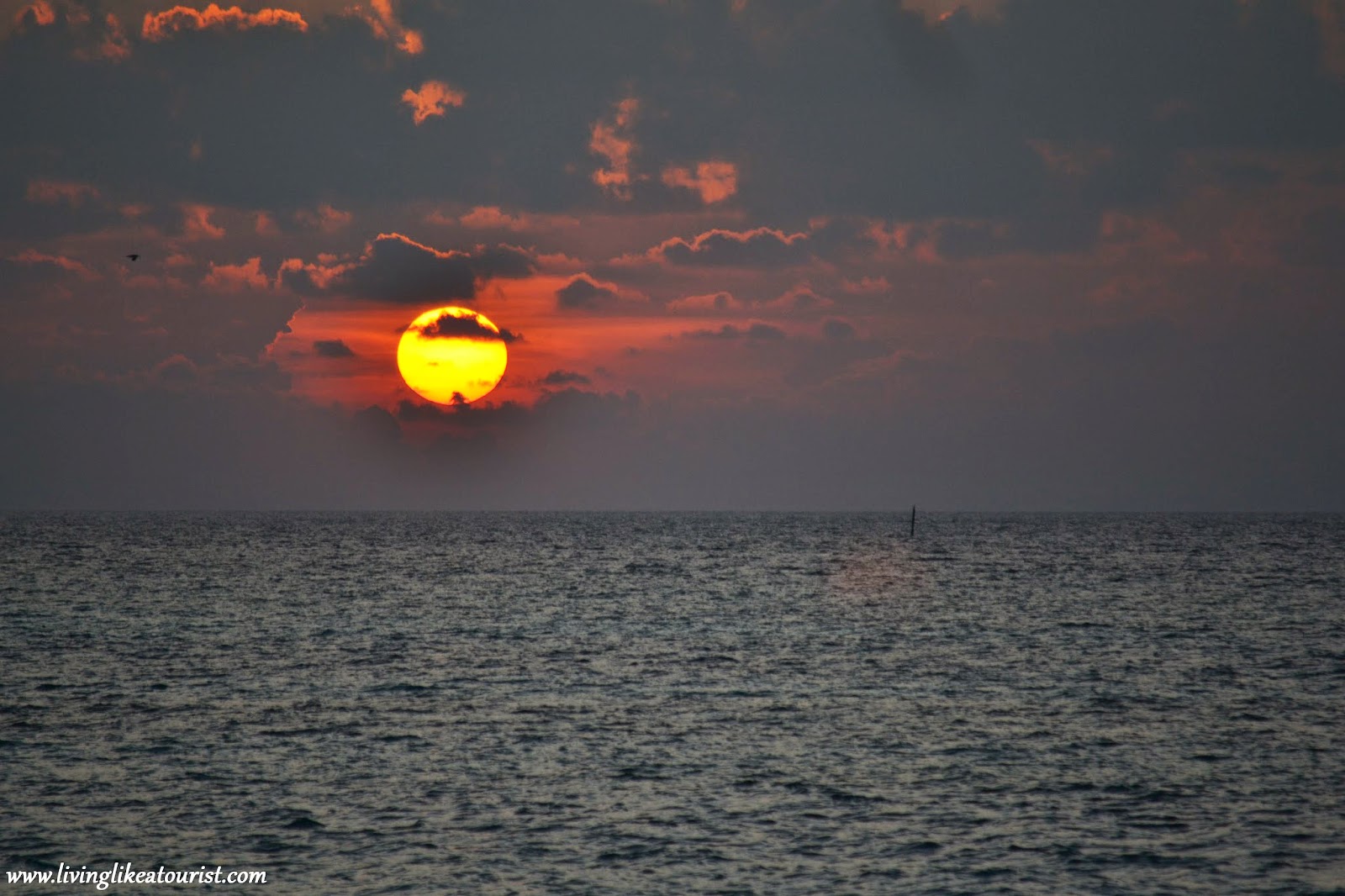 So you are just thankful that you could enjoy it at all and you take a million photos to remember the water, the sunsets, the tropical trees and fruit, the ripples of the wind on the water and sand, the brightly colored exotic fish that makes you realize that God is a painter, the hammocks, the sunshine and the peace of being on a tiny island with no city, with no cars, with no real connection to anything else expect via boat.

How marvelously different from the day to day rhythm of real life in a city. A different pace and way of life – maybe that is what you really go to see… with the sunsets and setting as the icing on the cake. The Maldives were definitely the icing on an already very sweet honeymoon.
Labels: Beach Maldives Sri Lanka Travel Trips