Ferragosto is like Christmas. For the August 15 holiday and the subsequent ponte (days to take off to bridge the gap between the holiday and a weekend), the tourist industry milks it for all it's worth. What's more is that, from Italy, most people gravitate to the same places, i.e. somewhere south and/or beach-y.

So what we have come to realize over the years is that, it is advisable (for both your wallet and your serenity) to look north. Tantalizing as Croatia, Greece and South of Spain sound, in August, they can end up costing you the equivalents of three trips somewhere else and feeling like you are in Italy anyway because of this Ferragosto exodus. 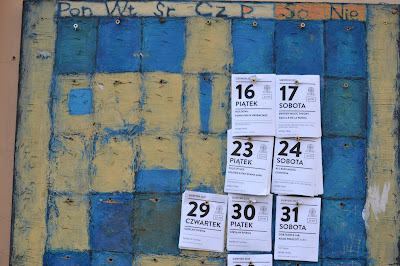 Not being beach bunnies to begin with, we opted to skip out on the 4-day beach holiday and instead let the airfares guide our way. In a quick minute, Krakow came to the top of that list. The lack of comments I had heard about this city made it an intriguing potential destination. The comparative cost of the airfare cinched it, and we headed to Poland for 3.5 days of... I didn't know what.


As per my new trend of doing virtually no research prior to being mid-air, we were halfway to Krakow before I even knew what this Polish metropolis is really known for. It turns out Krakow offers:
So over the next four days, we set out to see, do or eat all of these things. I can't chronicle everything, but I will give you some highlights of what I will say was one of my favorite weekend trips away.

Pierogis are awesome. They are dumplings a bit similar to the ones you can find at Chinese dim sum. Usually they are filled with meat, but to my joy, I found they also had potato and cheese filled ones. These made up more than one of my meals during my time in Krakow.

Vodka: I was a silly teenager that ruined the potential to ever see Vodka as anything but a toxin. So when friends recommended tasting the famous Polish vodka, I practically dry-heaved just at the suggestion. However, I thought that, after almost 2 decades, I should perhaps take another sip of this drink to give it a second shot (pun intended). However, let me clarify, you don't shoot Polish vodka. When this glass came and it smelled like pure sweet honey, my fear dampened a bit and to my surprise, I began happily sipping it at a café on the main Market Square. I then ordered a second one that tasted like cherry and motivated my taste buds apologize to this liquor for years of a harsh grudge. That is the story of how Vodka and I made amends.


Auschwitz. I am not even sure I can talk about it. It is shocking, disturbing, upsetting, surreal, sickening, awful and depressing all at once. How can I possibly recommend someone to go there? But, sadly, it is reality. The only picture I am willing to share is the one of the sign above, and those words are perhaps reason enough to visit this memorial.


Wieliczka Salt mine: it would never have occurred to me to visit a mine. I am not particularly fond of places that are thousands of feet away from natural light. However, hearing that there was an underground cathedral made entirely out of salt and from the hands of miners, I thought this was something that I had to see. It was well worth it. Everything from the columns, statues, crosses, chandeliers, a relief of the Last Supper were all made out of salt so well carved and smoothed that it looked like marble to the unsuspecting eye. Truly a unique experience and the reason it is a UNESCO World Heritage site.

Pope John Paul II's kind face is seen all over town from outside the main cathedral to within the underground Cathedral on a statue made of salt. 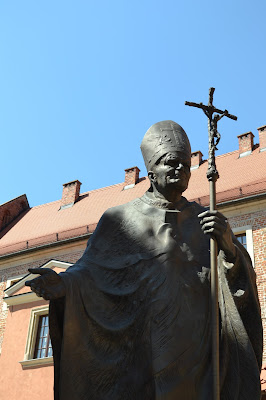 So a couple things about food and drink in Krakow:


The photos can't capture it, but some trips are just a combination of wonderful pieces: lovely people, great food, cheap beer, good weather, a lot of history, opportunities to relax, walk, bike ride, try new things, listen to music, shop... it was everything I wanted a long weekend to be. And even better, it felt like a weekend away: not a pasta dish or cappuccino in sight. It's nice to take a break.