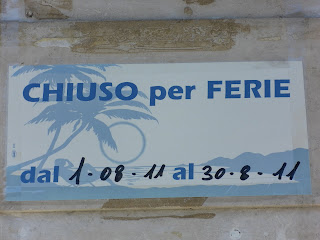 August. I have never seen a country more completely shut down than Italy in August. Where cars used to be parked on sidewalks, in bus lanes and in between trash cans, this is a month where there are blocks of empty spots. Bustling neighborhoods become row after row of gray metal gates with signs saying "Chiuso per Ferie." And tourists become isolated in the Center, left alone in the city to encounter the perhaps one or two grumpy Romans who are stuck keeping the Tabacchi or Bar open during this month of rest.

It isn't hard to understand why though. There is always a week at the end of July or middle of August when for seven straight days, a blazing sun rises high in the sky. Temperatures climb to well over 90 degrees (32+ Celsius) with nights not much cooler. The usual light breeze in Rome evaporates, and the heat just gets stuck between the buildings, bouncing back and forth between them and enveloping all those who walk in its path. When your country has 4,722 miles (7,600 km) of Mediterranean coastline, why wouldn't you flock to the beach to escape these conditions?

Usually an adamant opponent of air conditioning, I change my vote during this particular week and praise the invention when I am in it and I crave it when I am not.

Perhaps the greater torture for me during this week is that the battle with my nemesis, the tiger mosquito, escalates to even higher levels. Tiger mosquitoes get excited and revved up by the heat and go prowling for sweaty, sweet-smelling humans. I am a walking mosquito-pheromone. So, in August, this usually means that mosquitoes will munch on my face as a snack while waiting for the repellant smeared over the rest of my body to wear off so they can have a proper meal on my legs or arms. Like paper cuts, you wouldn't imagine something so small to be such torture. But they are.

It is a month in which it is hard to stay motivated, either in body or in thought. Both seem to have taken cues from their surroundings and hung out their own "Chiuso per Ferie" signs. As one who grew up in the U.S., this usually just makes me feel lazy. But with each successive August in Italy, this feeling in me is fading.

As we all know, it is nice to shut down sometimes.