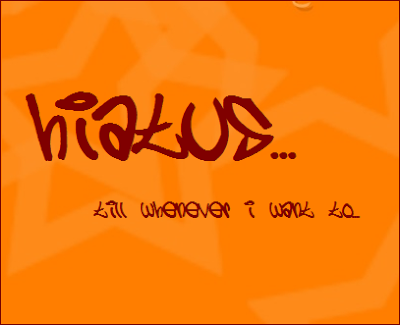 Probably in the blogging world, I have committed a grave sin in taking such a long break in writing.

My silence for the past month can only be defined as a hiatus- one that I will shortly explain. However, in the meantime, I think hiatus is an interesting word, and I believe it worthwhile to share some tidbits of information about it:

1) Coming from the Latin hiare, to gape
2) First recorded in 1613 to mean a gap or break in something
3) And, apparently, hiatus mode is something that bloggers do... as one example, (and also as the photo credit)... so maybe I am more of a blogger now than I thought I was.

Anyway, this April I entered a period in my life where there was so much going on, that taking the time to write about it would have been sensory overload. Perhaps like many others out there, I write to reflect on things, to sit and analyse, to make something real or to share it with others who can comment or advise. Sometimes though, events in life need to be left alone and absorbed before being shared. And I have barely had a moment to digest the events, some good, some not-so-good, of this month.

I could have foreseen to some extent that April was going to be chaotic: my first month in D.C., finishing the process of moving in, learning my new neighborhood, still getting accustomed to my job and its routine, reconnecting with friends in the area, hosting guests from all over the place... And, in addition to these fairly foreseen events, April also unveiled a cat with bladder stones that led to multiple trips to the vet, a ton of medication, and ultimately a surgery. There were other events of great significance in April, but as I am not done digesting them, I will have to write them at another time.

Yet, be assured, I have not let my philosophy go by the wayside. I have continued my quest to try something new at least once every day: this has included beet dip at the Russia House restaurant, tamarind sweets brought directly from Mexico, wine from Moldova, the World War II monument in D.C. and some of Georgetown's famous cupcakes, among many other things.

As I get caught up on writing, details will be forthcoming. However, my point of all this is: my days of being a tourist have not come to an end!
Labels: breaks hiatus Life Washington DC